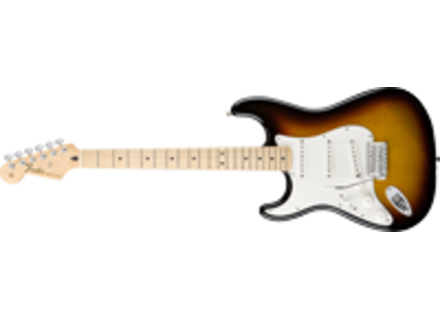 All user reviews for the Fender Standard Stratocaster LH [1990-2005]

sebasss's review (This content has been automatically translated from French)

Protective plate white, 3 ply, black painted ... No frills, just the basics. The violin is the finish quality is good.

on the other hand, Fender could have made knob buttons for lefties, because when you push the volume merits the knob says ... 1! They just pos HR strat buttons, then generates a supplement paid leave for a guitar left handed, as far as finishes are the rider!

"When we walk on the handle, no surprise. It's fender, no problem! The neck is lightly bomb button, U-shaped flattened the rear, there are brands quickly, touch is worthy of U.S. strat The varnish is of good quality slid all Frets are accurate to seul.Les is not jumbo, but sounds.

CASC-For the treble, like the heel is square to make way for the plate and screws. But does little reign CASC to treble, and it was the place to play Jimi without problem, even if it does not have his big hands!

-The bridge is standard, so do not use excessive force on the stem of vibrato, otherwise the guitar is dsaccorde quickly! Carrment me I broke the rod in the rack! (Yes, yes, i was a young nag, the era!)

-The weight of the guitar is standard, the stratum has been designed to have, very comfortable lgre and play! No need to buy a wide strap, you can play for hours with this stratum. It is well balance, no problem to play seated, the head rest his place, and with the bevels in the abdomen and the elbow can work for hours without tiring!

-With regard to the sound, I pleasantly surprised t! The pickups are far from being cheap, and even if it lacks sustain, the sound is really pleasant. It has the sound of Fender, and few cons souffle.Par the drglent: Mechanical is very fast, and it is better to change quickly ...

-This guitar is pretty versatile; the era (13 years ago!) I bought to play the Nirvana of Led Zep, Deep Purple and ... With my little 15 watt Fender, and any substance, dj c'tait the gas!

-Then, I pay a Marshall, and I rubbed the sounds floydienne. And the great, the sound cleans this guitar are valid! With good rverb, you can type the intro to Shine On You Crazy Diamond without problem. The only small BMOL is sustain. It is seen the difference with standard pickups, the sound quickly becomes TNU, and it becomes a little frustrated!

-The color of the sounds is all the same excellent for a guitar in this price range. Whatever the combination of pickups, Fender has sounded, and pleasure.
In the neck position was sound enough pais up, rather nicely rounded to the fender.
Intermediates in the positions, you can have the sonority Blues Clapton, with a little crunch.
For more rhythmic syncopation and sharp, it goes in the bridge position, and attack on the dry funk, or for leads with a distortion or overdrive.

But hey, most of the time I play either prfrais handle, or easel. So a slcteur 5 positions c'tait dj for me too ...

This stratum is my first, I played for 13 years and has made me a Fenderie! Its sound and its looks are indmodables, it is quite versatile and can make a good couple illusion amp.

+ Its handle easily and large enough
The Violin Making qualitbr /> The sound of the pickups
The price!

- The buttons for right knobs
The change: Mechanical after 2 years!
The lack of sustain

I hesitate between this and a Cort guitar style Fat Start (humbucker in the bridge) ... In the end I chose the heart and the mark that the reason Plutt spcificits and techniques, but I do not regret it. Here we have a real Stratocaster, with microphones and a little more powerful and new: Mechanical (SOP Gotoh I, was doing better), she can take the high dusting with U.S. Strats!

I bought 350 euros in 1995, and it is well worth its price. Plutt it ages well, apart from the change: Mechanical, and refrettage in a few years, she remains beautiful! As we say in France, "It has everything a great!"

Now I have a Telecaster 52 ', but with my budget era, I would do the same choice. Now, who prefers to pay less prestigious guitar brand, it is better to go elsewhere for the same price you can have a start type with more options!

Then crush? Or Reason? For me it was love at first sight!