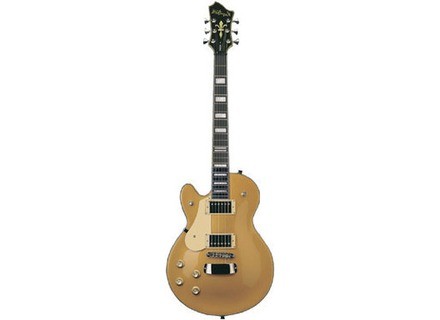 Ergonomics at:
I say pay attention to weight. is the need to keep the granny!
access to sharp falls far short of that of an SG. we can not ask the impossible non-plus.

Electronics (knobs and switches) is cheap but it is less intrusive than a bad violin.
we obtain easily that his wishes

the sound is very good. built for the Blues-Rock
This is very typical "vintage". But there is a little something more specific to micro hag. it is hot, very low fat but pretty accurate. attention to large satutarion. it with tube amps it expresses its potntiel.

The 3-position toggle "sound filter" is not very usable. Too bad the idea is good though.

Since I have my swede, I became a fan Hag. Now I have the Viking and I do not stop there ... Hagstrom is a great violin. that means you can easily upgrade (for those who wish). Hagstrom is also specificities (the shaft, microphones ,...)

the swede is racy, type, character. I think it's not an example of versatility, but if it is doing anyway. if you want more off-road, put it like microphones sh2 sh4 and voila ...
with the experience I resumed my eyes closed. Excellent value for money.

Mezzatone's review (This content has been automatically translated from French)

Hagstrom Swede LH
5
Swedish famous brand in the 80 dead, revived in the United States in 2006, the Swedish guitar-shaped Les Paul is absolutely divine!

then dissect the beast:

Mahogany set neck with 22 frets and pearl dens 12th doubled as gibson, all connected by a binding. Composite key, a novel touch reminiscent of maple! Incredible

the head is asymmetric with 6 mechanical oil baths as it is vintage or vintage reissue or a lily pearl is inlaid in the head.
The red varnish is transparent and reveals the wood grain of this beautiful curved table! 9 / 10
Two volumes a two-tone toggle switch and a dial tone, the sound palette is vast, from jazz, to blues and funk, rock to see the punk / hardcore 80, but we do metalheads friends let's face IT'S NOT. Otherwise you have to change these precious microphones that make all the personality of the guitar, so in my humble opinion is better to buy something else if you want to do metal.

The handle is great with a typical profile gibson, very fine, agreeable, even if a highway access to acute is hard, it's a normal LP, but it is a little shredder!
Treble is good access to the 19th box
the sound is-me singing I tell you!
the pickups are alnico 58 covered with a cover driven by a toggle switch 3 position toggle switch and another acting as selector dial tone for both pickups = versatility guaranteed! The sound is creamy and full of gain, this very dynamic, short for a guitar series is a success, it makes all the personality of the guitar. Once you have tasted it déccroche more! 10/10
the bridge is like violin hagstrom.Bref level 9 / 10. Mine is one of the prototypes for testing, so the finish is flawless highly polished frets, polish nickel ... SUCCESS!

Sound
Then ... It's simply divine. Depending on the position of the tone and toggle selector, you get everything! the sound of a strat Crystaline but not too much in the neck position and a hot saturated with his double. The best neck and microphone that sounds great for solos!!
I put the 10/10 for the price because you have better than a Epiphone or even see much better than a gibson expensive !!!!( I say that I kidding ... I tried the gibsons I always come back ben not.)

In short I find nothing wrong with this guitar is perfect! more reissues come with a real fly hard for a ridiculous price!

true for the Swedish 1980 count between 500 and 800 € for the privilege of owning one knowing that it is popular with collectors
for editions that are like to see better but nine of 650 € with the fly!

Captain Savon's review (This content has been automatically translated from French)"Good guitar ... for the Made in China"

Hagstrom Swede LH
3
Hagstrom is a Swedish brand legendary, revered by guitarists class, acclaimed Patrick Eudeline ... I saw a picture on the Internet, a commercial brand with Frank Zappa who presented a model of a 12-string Hagstrom. The production is stopped for a long time, and now new models reappear, whose manufacture is spread over several countries, I understand. And let&#39;s face it, they have to face.

This is a solid-body electric guitar, Les Paul type shape, 22 frets. Two humbuckers, stop tailpiece type bar Epiphone, a flight and a micro tone, a three-position switch for the pickups and a three position selector for dial tone. Schaller.

This guitar is very heavy, thick, very thick set neck, as opposed to the guitars for smaller players such Strat. You must have strong shoulders. Access to acute is not easy. Néamoins, the grip is good. And hey, it&#39;s not a scratch to the metal ...

Its level, attention: NO SOUND "modern". The pickups have a very hot, very serious and mediums is limited drooling. The gain is pretty huge, and we obtain easily a blues sound (micro severe), type Meters funk / Funkadelik (micro acute) or Jazz (both sets). Personally, I find the sound overwhelming, difficult to master, but really interesting compared to what is currently (Ibanez, Squier, PRS, and I do not know what yet).

As I said before, it suits me perfectly. I played with the rhythm in my funk band Wild for a while (before finding another scratch, which allowed me to concentrate on singing and jumping around) and it was fine. In a funk-jazz group, it was perfect, a bit dirty to taste the other guitarist (a Strateu), but I did not need to turn up the volume to go solo, so the dynamics of this guitar is impressive. And to the blues, then there ...

I played it with transistor amps (Marshall, Peavey). I try it on a tube amp when I have one on hand. Effects? Distal end.

Of course, the sounds are quite typed "low end". But we must know what you want. The sound is always rich, and the tone pots are very effective. The dial tone an active low-pass filter. Basically, the middle: his nrmal, down: the filthy, up: the ultra filthy. The happy in a pure state with a crunch or distortion. The sustain is good (set neck), and the lifts are very accurate. We take pleasure to agree, is to say!

For cons, the highs are a bit nasal, and the bass tend to saturate quickly, squarely at the scratch. But I paid my mics anyhow. We&#39;ll have to fix it.

Cons:
+ Not very versatile
+ Finishing details that traissent its origins "Asian" (cutting plate over evil, a little sore nut molded plastic, etc.).
+ Is it really a reprint of an original? Or a new copy of LP?

Never mind. What matters is for a rocker look, and sound (and potatoes, but that goes with it). That&#39;s what defines it. This guitar suits me, it was class, not a toy, I was stupid to hesitate. Maybe one day I will find better, but given the horrors that are present (thank you to the metalheads for their bad taste), I was delighted to see such beauty in my music shop. € 600 with gig bag. I have done a better deal? Maybe. Time will tell.

Update 08/2010: I will sell this guitar. Although it has a very good, very good sustain, look terrible, etc., I do not play it for almost two years because it is too heavy, the sound is too distinctive, and I prefer the simple microphone, finally . In my group, I am the man in the single coil. This is the other that uses the scratch doubles. And it has a gibson 73. I have an American Deluxe Telecaster for a short time, which raised my standards.

In use, when I realized that even the plate is in a really low-end materials (mug full of scratches it while I used very little), the hardware is chrome metal doubtful (s oxide very quickly and very much visible), and the sound of microphones was strangely unbalanced (the microphone gets serious to be much stronger than the micro acute). It does not make a bad guitar, but it seems to me € 600 price now. A 400-500 € I said yes. Finally, I would say it&#39;s honest. This is the price of a Fender Mex and even if the quality is a little worse, it was REALLY a guitar hanging weight and is not made wooden crate.

In addition, I considered changing the pickups, and I realized by removing (to see how they were damn) that the cover is welded to the base of the microphone. So no way to remove it: bad point.

I cut a little note of my time. But, I repeat, this is not a bad guitar.

Michel L.'s review (This content has been automatically translated from French)

Hagstrom Swede LH
5
Hagstrm Sweed 1971. Fully mahogany neck and affects bne impeccable. Manufacturing sudoise well sr. Acute easily accessible. Impeccable construction and sustainable rsistante trs. Cls Grover Imperial, anything. Mine is modified according to my personal gots to have more opportunity to rglages and a range of sounds tighter. I have done well to follow my instincts and not the sellers feedback, it became one of the best instruments that I had the opportunity to touch.

Its weight is sometimes a handicap lightweight, but the game compensates FLEXIBILITY. Ct is the full and very fat, like a good old Les Paul, a much more reasonable price. No snobbery, it's pure pleasure to play with a quality instrument. Mine is modified by a high output DiMarzio Humbucker bridge, combined with the original neck pickup gives a roundness about the results impressive and a good range of sounds. This guitar MRIT intelligent changes will only open its potential is immense. I have always chosen to change my Gibson in prtexte to preserve and maintain its original value; APRS sudden I see that it was a mistake due to lack of audacity and exprience.

For Rock Heavy is successful, the Blues also British style, but the top is reached with the progressive-rock '70s. I use it mostly with a Fender Super Reverb (1976) Fully two lamps in OMH, a rgal. For fans of the Rolling Stones of the 70s is a must.
I recommend the use of ropes in order to properly take advantage of its ability vintage. Personally I have the 13-56 and it's great. (I dtest the current fashion of using thin son) This lightweight ncessite an adjustment of the handle but REALLY worth the time. The game is prcis and keeps the agreement for weeks.

I have 30 years to beginners j'tais a little skeptical because I possdais a Les Paul Gold Top and j'tais c'tait sure the best. Discoveries I use the quality (and default) from this old lady, and I do not want me Sparer, I sold the Gold Top and I ... congratulates me! She Headquarters a place of honor in my small collection (more than a dozen guitars). And aging like fine wine ...

Did you find this review helpful?yesno
»
Read the 7 user reviews on the Hagstrom Swede LH »