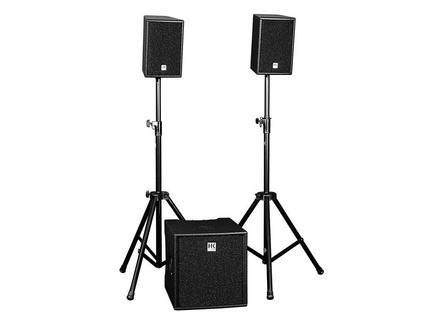 HK Audio Lucas Impact
5
Good technology but they screw up at the assembly line.
The lack of midrange is that the coils are putted in reverse.(result Ft is not 2Khz, it's 5Khz)
I chabged the driver with B&C DEH360, i didnt invert the coils (Ft=5k) but i have extended the midrange of the low driver (take off capacitor 10uF, put 2,2uF)

Dj-musiqualite's review (This content has been automatically translated from French)

HK Audio Lucas Impact
Several months that I use, and a hk audio elias px, very good product very reliable and efficient dispatch it with a super serious sound quality. Good value saw the product I will ever choose hk without hesitation!.

Chichi's review (This content has been automatically translated from French)

HK Audio Lucas Impact
2
I used it for 3 month test to change my lucas 1000
Tired of the Lucas 1000 (drooling satellites, its soft and lacking in bass depth)
My dealer loaned me a lucas impact that I used about 15 nights.
Most:
- Even smaller and lighter
- More top end
- Much more bass and wider
- Orientation of the satellites well thought

the -:
- Low frequency radiating behind the box (it's hell when playing with
it in front of you, we imagine that the public has the sound of shit!)
- EQ presets are confusing (the processor bump all the time and
differently depending on the gain and I think he should try Fitr feedback)
- Impossible to have a "right"
- There is a huge "hole" in the lower mids to the point that the singer did not have the same voice!
- Was the feeling of having two different sound systems: one for bass and treble for
but the two do not sound the same!

This sound must be made for I do not know that?
at that price, an amateur wants rather "large", and a stone's pro something manageable
But this thing is downright confusing!
I took a real pleasure to find my 1000 Lucas and I will look elsewhere for a novella sound system ...

Mac Intosh's review (This content has been automatically translated from French)

HK Audio Lucas Impact
5
It is surprising and little Systm Drout.
Before dvelopper, let us look at the aspect Aesthetics.
With Paisse granule black paint, its protective grilles HP coated steel foam alvole, also black, this little Systm has a nice look trs.
There are no words, the construction is trssrieuse and finish is beautiful. It's srieux.

Installation is facilitated by a child. Ask, four cables connected, turn on and off you go ...

Turning now the cost of the System.
And it has become the only surprising Drout.
At start, a long enough delay prevents the sound is arrived IMMEDIATE. (Probably time to test the circuit security)
Meanwhile the control panel lights up and flashes of Systm everywhere. (Sure, it's the most beautiful effect)
We quickly realized the time when the Systm is ready to work, since the black spot is one of the System.
Indeed, it offers us a background noise "pcchhhhhhhhh" Submitted enough. It will take a level of its already well compltement Submitted to cover it and make it disappear. Too bad ...
Operating rgime through the Systm is enjoyable listening. Submitted assets are low (can be a bit too), round and warm.
The mdiums are a little behind, but also the. So nothing catastrophic for vocals. The highs are clean and not aggressive.
This is the DDO that possde 5 positions + 1 mute is surprising use. Each position correction curve changes the sound spectrum. All as to find the right position for the style of music that is broadcast.
A high rgime is Drout. Systm is the mtamorphose ...
The box is put his thundering bass like crazy. While they remain perfectly clean, but leaves plenty "on his ass" ...
Satellites as they become more aggressive. The sound is still trs clean, audible and intelligible, but has nothing do with the wisdom of the operation "civilisquot;. And the limiter action quickly to remind us of the order.
In short, this Systm should delight fans of electronic music fans and top rgime of variation on a more rgime rsonnable.
A second point ngative is grafted to the background noise is the manifestation of a "POC" quite violate estinction of Systm, even with the gain ramen 0. Too bad again.

The -
- Large enough noise
- Monitor high rgimes
- "POC" the estinction
Here's a nice little Systm easy to use and does not cost too much to sduira by its looks, its power and quality sound INTERESTED respectable apprciable trs.
He certainly small default, but for that price, you can not have L-Acoustics sound or Meyer. Everything is relative ...

Did you find this review helpful?yesno
»
Read the 7 user reviews on the HK Audio Lucas Impact »