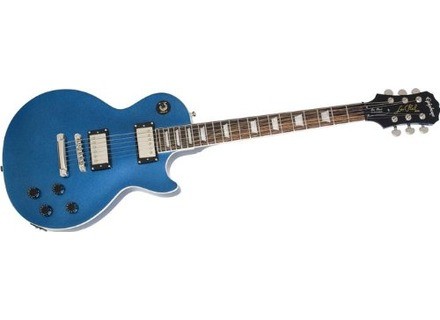 Only draw back's the pick up's are a little weak and this is lighter then the late 90's model. // 8

Access to the upper frets is somewhat hindered by the neck joint and cramped/small lower horn cutaway. It is not too bad, but not the easiest I've played on - typical for a Les Paul styled guitar.
I found the guitar to be a little heavy in weight, which some prefer and think it makes a guitar sound better and it had pretty good balance.
It is easy to get a variety of nice sounds with the two humbuckers anr 3-way switch.
I found the fat neck was not easy to use for lead work and I did not get along with it too well.
The tuning pegs, nut or something on this guitar were terrible. I usually needed to tune almost after every song I used it on. That was a real pain at a live show!

I used this guitar with a solidstate Marshall 3100 series amp and stock Marshall cab for a two week fly in set of shows with my old classic rock cover band.
I was looking to get and did get the classic rock sounds from rock to pop like: the Police, ZZ Top, Steppenwolf and VH - it did ok at covering this material.
I found the pickups to be pretty stale and hard to work with when doing clean tones.
It did a good/ok job with the classic rock songs we did.

I hated the fact that it would not stay in tune - and I did quite a few tricks to see if I could help it, but nothing worked. I did not like the neck on this guitar and it was kind of heavy.
It did just an ok job of getting the tones I needed because of the weak pickups - and it looked cool under stage lights and unfortunately that was the best thing about it.
I have heard some people swear by these - but I think like any Gibson product there are some good ones and quite a few bad ones. This wasn't a very good one.

I borrowed this guitar for two weeks, from the other guitar player, who bought it new for $600 or so. I used his because I didn't want to fly with my expensive guitars. I don't think it was a good guitar for the price.
I would never buy it if given the chance.
I have owned many guitars and had a number of years where I would buy, try and flip, which enabled me to have many guitars around to try out.
This one wasn't worth it!

maddolet's review (This content has been automatically translated from French)

So the problem is just a lil, a lespaul is already a bit heavy by nature, so in addition to the battery of microphones, vla the result, at the beginning you can feel the pain, but after the habit is good.
The handle is quite rounded, Access to acute is very good, easily accessible.
After the form is a bah lespaul (if you like, if you like ....)

Well when I have the combo was plugged into my lamp, I was sure the ass, the sound is so beautiful. it should really have what I play: death / heavy / speed metal rock / blues
The distortion is heavy, it's a real pleasure to play on, the sound is warm with excellent sustain, is an excellent precision

I used the recently but it's true I were immediately convinced.
What I like first of all about her is her style, I love the Les Paul shape and voila, with microphones, c is a trick phew, it provides
if the purchase would be a remake, I do not hesitate
Did you find this review helpful?yesno
»

biquet82's review (This content has been automatically translated from French)

Epiphone Les Paul Standard Sparkle Flake
5
Made in Korea, the neck and body are mahogany, the key is made of rosewood, the table is maple.
The finish is polished, the paint is spangled, giving it the flashy color the pictures.
This model has 22 frets, 2 volume pots, 2 tone pots, a selector 3 position, which control two humbuckers.
The fittings are nickel.

The handle is very comfortable despite the cheap strings that came with the guitar, which in turn is very well balanced, not heavy, access to treble is like all Les Paul, the sound gave me a good impression, a very solid instrument.

This model suits me perfectly. I tested it with my head Marshall 2203, with HP Celestion, using my Prophesy preamp.
This is where things get complicated: the pickups are really cheap. It's a shame, the sound comes out, it stuck, either in rhythm or lead. It is a real misery ...

I received it today. I am broke, this is my first Les Paul.
Excellent value for money, however, predict change very quickly microphones, it is frustrating.
Think also touch the nut, see the change, and the mechanical handle.
I read that the controls were weaklings, I think the capacitor is a change at the same time.
Wholesale review the full email. The violin seems to me more than correct. I think I made a good choice of guitar, plus she has to face.
Continued ... after my change of microphone.