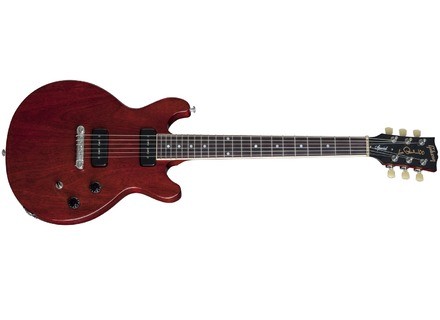 Average Score:4.0(4/5 based on 1 review)
Audience: Anyone Value For Money : Correct
Not satisfied with those reviews?
Our members also liked:

Md Max's review"A real, tiny, great guitar – and it doesn’t look cheaply made. Is Gibson back?"

I haven’t bought it but trie dit on MARSHALL (a rather modern head+cab model, JVM style) and FENDER (HOT ROD) amps.

I. CRAFTSMANSHIP AND FINISH:

To be honest, I’ve been disappointed by Gibson and I neatly prefer Fender. My disappointment comes from their instrument’s craftsmanship and finish, which I consider very bad and after buying one of those loathed models in 2010 I then immediately turned away from the brand.

This model is more expensive than any model in the same range 4 or 5 years ago (SP or LES PAUL-shaped), but I must admit the quality can be felt.

On the instrument that I’ve played, the finish was very good in spite of a few sanding-related faults here or there – nothing noticeable at first sight, nor by your audience or bandmates. To be really picky I could also mention how easily the lacquer shows marks, but hey, it’s a Gibson, so yeah you’ll HAVE TO polish it everytime you use it. The black-lacquered head and neck join seamlessly – no lacquer drip to be mentioned, and the guitar’s overall finish is almost flawless.

The head and neck join perfectly, you can’t even notice where they join and you’d think they were made from a single piece. While disturbing and un-aesthetic to those (like me) who prefer old-style models, the tuners work marvel. The old-time synthetic bone is no more, it has now been replaced by a metal joint that favors the string’s tension, hence helps keeping the instrument in tune. This joint looks great and gives the instrument a real character, it no longer has that old white, formica-looking aspect.

Finally, the stopbar – here made of metal – is made of brushed steel, I can’t say I like how it looks but it plays its role, the strings are kept as they should and everything works as expected.

Finally I’ll say the quality of the rosewood is very fine, it’s almost coal-looking as on some GIBSON or FENDER custom shop model – a real surprise for such a price!

On the MARSHALL and FENDER, the sound is really round, warm, not cold at all. The guitar will do the job for rock, country, rock'n'roll, blues, punk, grunge, hard rock (ala AC/DC), pop, post-rock, noise, brit rock. It’s made to be suitable for both a “classic” (rock, 60s/70s blues covers) or a more “alternative” (creation, exploration of more modern styles) use. However, it’s bound to lack power for METAL – it won’t do, even with a MARSHALL’s heavy distortion.

The P90 pickups sound rather soft, they’re real single coils with a sound that’s both creamy and punchy if you want them to be.

Two knobs (volume and tone) and a 3-way switch.

The lows are really bluesy-sounding, very hot and rock, on either the MARSHALL or FENDER. Clean sounds are very Fender-esque, even more on the FENDER amp.
The mid switch position provides more mids and highs, with a sound more on the rock side, more modern yet warm with the MARSHALL, more into 90s/2000s rock tones with the FENDER.
The last position provides a more twangy sound, reminiscent of a Telecaster/Jaguar to me – perfect for country, for instance.

+: CRAFTSMANSHIP AND FINISH, with a special mention to the neck/head joint, the head and neck’s lacquer and the impressive rosewood.
+: the lacquer is thick and seems sturdy.
+: very good pickups
+: the electronics is great
+: a very comfortable neck, which is unusual with Gibsons, somewhere in-between an ES 330 and an SG, both flat and thin, which won’t get you tired even after playing for 1 to 2 hours imo. More comfortable to my taste than a slim taper.
+: value for money seems fait – for once (I think it’s worth the 999€)

-: a bit too much highs in the third position, as well as the intermediate one with the FENDER amp. It might take modding the pots and adding a condenser to have the whole sound a bit softer.
-: the lacquer shows marks.

Musically yours!
Did you find this review helpful?yesno
Cookies help us improve performance, enhance user experience and deliver our services. By using our services, you agree to our use of cookies. Find out more.