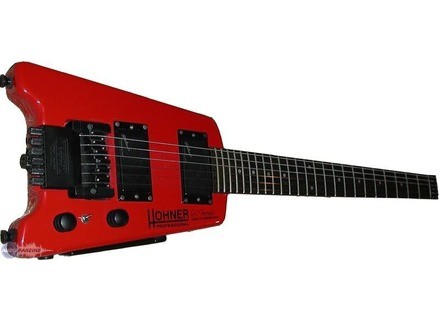 Feupied's review (This content has been automatically translated from French)

Hohner G2 Tremolo
4
The Hohner G2 Tremolo guitar is a small and almost no head without a body, for comparison's about the size of a tennis racket.
The handle has a normal length, however, it is characterized by a substantial thickness and a very round profile, it has 24 frets with a zero fret.
The body is simply constituted of two species on the rear wings which are attached strap buttons.
It has two humbucker pickups "designed by EMG Select," a selector in the form of a mini 3-position switch and two knobs, one volume and one for tone.
The floating tremolo (it states, "Steinberger Tremolo System - Under License") includes a locking system with a rotating wedge beneath the block.
It is necessary to use sets of double strings balls (one at each end)
The tuning is done by a system of screw knobs on the back of the block vibrato.
To enable it to play sitting down, the guitar is equipped with a small fold-foot dock that guitar on his leg. In this position it is best to use a cable equipped with a bent leg so that does not force it.

Although unusual, double-ball strings are no problem for retailers that offer a wide selection of strings to their customers, if they are obtained in less than a week by ordering a shop seriously.
In any case this arrangement greatly simplifies the change of strings. It is almost instantaneous, it is without a key or tool and the tuning is very stable.
There are two possible locations for the stem of vibrato, two holes placed at the top and bottom of the tailpiece. It seems to me that this system of double fixation, associated with double button strap on the back is provided to allow the left to return the guitar. But part of this group of traitors to the left because that play like common right-handed, I never tried.

The pickups are decent but not great, their output level is correct and the sustain is good too.
This guitar sounds very serious (too much for my taste) and is still more comfortable in the distorted sounds that clear.
Do not expect a very slamming her, ultimately it would be even more of a little soft (rise 10-46).
Altogether a sound, if not thin, is still sufficiently varied and relatively versatile.

This is a guitar bought used in 2000, I do not know her age but has aged well, it holds up and does not always default notable except for a bad contact on the output jack (since time it bothers me, I should change it).
For my usage, the value of this guitar is mainly its small size, I use it primarily as a travel guitar, the small rectangular case (original I think) that accompanies it is perfectly suited for this purpose. It is an instrument that can be found regularly offered on occasion at reasonable prices, it can do so good "small" second guitar especially if the first is rather in the style Start.

Other Hohner other Electric Guitars