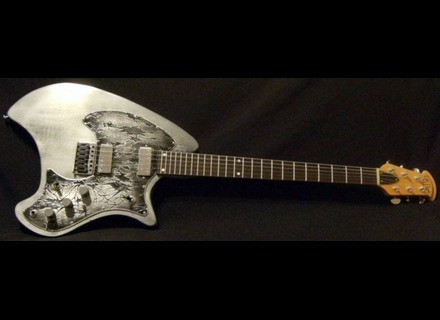 lovesucker's review (This content has been automatically translated from French)" and three!"

Loïc Le Pape Steelwinner
5
after much discussion, both for the finish to the election, thank you Loic know-how to set foot on land for projects too "loaded" or inconsistent, so we have a maple neck with 24 frets Sébaston radius 9.5 with C affects Rosewood, that as regards the wood.

to sing it all, two mini humbuckers and a piezo SP custom voice set by 1 vol, 1 tone + 1 piezo vol. two toggle switches, config usual for humbuckers and piezo alone piezo + mic (s) mic (s). finally a kill switch to shut her up on command. (And I ignore the misogynistic jokes)

the guitar is well balanced game sitting or standing, although quite the point contact with the torso changed my other guitars, getting used to ... and I've saved the chamfers of the original model, except on the wing upper forearm.

The handle is super comfortable to the touch and adapts well to my hands. hooping impeccable, bravo Sébaston passage for his work, his head is beautifully carved. I did eventually make a wedge heel but apparently not technically feasible. and since the time I played on the square heel discomfort is not too apparent.

how it sounds? ben very nicely.

A vacuum is homogeneous with no longer sustain a surprise on Lepape.

And once connected it still remains in an area well known now.

I know not really make a precise description and regulars. mini-humbuckers have this little side that reminds me slipped a knife blade sharpened like a razor and the piezo adds a very nice additional color used alone or coupled with the mic, like a boost in the treble. must also be careful to be assayed for the passing of a configuration to another can have the volume too great a variation as appropriate.

I scratched that I intended to sound rather turning clear or slightly saturated and it does. I play in Israel and loop over your house.
However, I also tested a group and live on more stuff and it beats wok'n'woll well too.


What about most is a Lepape, thank you again for your job Loïc.