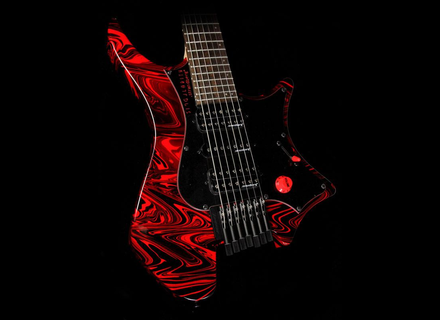 Singularity, Other Electric Guitar from Strandberg.

Value For Money : Correct Audience: Anyone
SOUND:
Below is a video that covers the tones of the various pickup selections under ‘clean’ amp conditions. As well, there are various sound clips engaging the heavier strings under conditions of gain, distortion and fuzz:

The reason for emphasizing heavy riffs with gain, distortion and fuzz was to showcase how crisp and clear the Singularity pickups are. Initially they do sound thin and certainly not ballsy like active pickups, but considering this guitar is the signature model of Per Nilsson (Scar Symmetry), the pickups (matched Strandberg Alnico H-S-H by G&B) were designed to take on a lot of gain/distortion while standing out in the mix. And they do an excellent job at that.

The hum cancelling pickups are controlled by an OEM 5-way blade switch, selecting bridge humbucker, bridge outer coil + middle pickup, middle pickup, neck outer coil + middle pickup and neck pickup. These offer some very nice and usable tones (even the middle pickup, which I’m typically not a fan of using). On that note, the Singularity does not have a TONE knob – tones are created by selecting the pickup(s) and adjusting your amp, EQ, pedals, etc. I’m very OK with this since I always kept my tone full treble on every pickup except the bridge (I sometimes would dial back the treble a bit, depending on my amps, effects, etc.), and having to adjust some other aspect in the signal chain (other than a guitar’s tone button) is a non-issue.
FEATURES:
First, note that this is the basic model and not the one with the True Temperament neck. The Singularity is a 7-string guitar with a belly and heel carve, an arm bevel, with a solid basswood body at a total weight of 5 pounds. It has a 24 fret (Jescar 57110 NS18%) maple 25.5 inch scale neck, an Indian Rosewood fretboard, pearloid offset dot inlays and a dual action trussrod. The neck is the patented Endurneck, which has angled flat surfaces (rather than being rounded) to enhance thumb stability and pressure (which causes less fatigue of the fret hand) – however, it also is a thinner profile than typical Endurnecks, which is nice for those with smaller hands and when working across seven strings.
I’m a fan of headless guitars (a lot less banging around in a small home studio), but also because of the bridge/tuning systems involved. Strandberg has a very nice bridge and string lock system (the EGS 5 Fixed Bridge) that stays in tune relatively well – only a bit of tuning now and again and nothing out of the ordinary.

ACTION, FIT & FINISH:
This model is available in solid red, but the real eye catcher is the black and red swirl. The lacquer is well done and the signature name cutout on the faceplate is a nice touch. The frets are well dressed without any sharp edges or irregularities and the string action is nice and low (better than the Boden Prog 7 that I reviewed previously). The back of the neck is exceptionally smooth as well, and without feeling tacky on the hands after playing for an hour or two (in other words, an excellent finish that prevents the palm from sticking as it heats up and gets clammy).

RELIABILITY & DURABILITY:
The Singularity is a solid-built guitar. Physically I do not feel any difference in quality when compared to having played the Boden Prog 7 or the Masvidalien Cosmo, two more expensive Strandberg guitars. The truss rod in the neck may be more budget minded in the Singularity, but unless your guitar exists in unusual and constantly changing weather conditions, I doubt this will have much of an impact.

The electronics are quiet, although you can hear slight noise when moving the volume knob up and down, but only when an amp is cranked with full gain. The pickup 5-blade selector switch is quiet, although only time will tell how well that will hold up (which is the case with any guitar). The point being, it’s difficult to grade reliability and durability when a review is made on any piece of gear that is only weeks or a few months old, as opposed to years of regular use and ‘normal’ abuse.

OVERALL IMPRESSION:
The Strandberg Singularity is considered a budget or entry guitar because of its price, approximately $1200 USD. However, although made in China (Yako Musical Instruments) quality standards have been maintained. It’s unfortunate that China has received a bad reputation in musical instrument production, but the Singularity model proves that a quality guitar can be produced that meets the criterion of its designer.

If you’re into metal or prog and want to own a Strandberg, this definitely is a good first choice. Regardless, under clean conditions I very much like the tones coming from the pickups and you can get some excellent sounds for more traditional rock (although not ‘fat’ like you would from a Les Paul, but definitely ‘bigger’ than you would from a Strat).