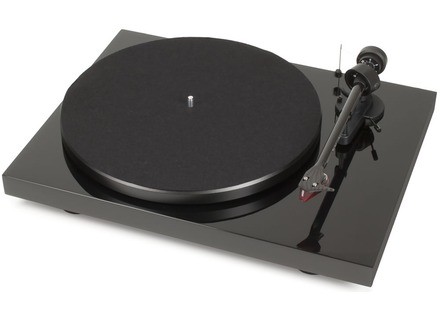 The set comes with a cell Moving Magnet (MM), Ortofon 2M Red, which should no longer be proven. It is also available with another cell Ortofon, the OM10 ... but I have not heard in action.

It is a turntable with a simple classical training. Belt activates a sub-set, which causes the greatest in its course.

I note at the outset that the manufacturer has thought about a small point. In fact, the engine is suspended by a system of elastic, which I did not picture here. This is stupid and well thought out. And is often used in Pro-Ject in the entry level. This, in order to avoid transmission of vibration to the tray. Well thought I said.

But the most impressive remains, unquestionably, very good arm, Well finished and frankly, mature for this type of platinum. With a weight adjustment numbered, allowing adjustment effective and easier ... but do not think that is a platinum plug & play so far. There are decks that land settled hair, but it is not. Will not see a flaw. It is quite common, almost "normal" for this hobby what vinyl.

As I said in one thread to another member. This is a Pro-Ject turntable input range SERIOUS. Basically, the bare minimum to be able to talk about hifi.

To understand what this turntable, I can put in comparison with the same manufacturer RPM 1.3 (rather known, that's why I compare here). It is equipped with the same capsule (Ortophon 2M Red). RPM 1.3 is a bit more fast track and the signal is brighter in the high frequency range, but the Debut Carbon has more weight and sitting in the grave, with a medium-low transition more melodious, which allows better voice reproduction. This also benefits, in my opinion, guitars, which have a nice body, well rounded and well cute with this turntable. Overall it has a lot of "pep" and a beautiful differentiation dynamics. In this price range, it commands respect.

But I want to relativize my remarks to the class record players to less than 400 euros. Authority "concrete" of nottingham or Sota, where natural reproduction is not reached. But I think there's a reason why some can extend nearly 1,600 euros more. If we remain in the record players below 500 euros, is part of Carbon Debut escaped from the lead.

A weak point however, is the connection cable supplied with this RCA turntable, which is at low end hifi supermarket. He eats space and depth of sound. To replace it with a correct cable when possible.

To summarize: It is in any case a turntable very pleasant and friendly for many styles of music, and I personally find that the best minds Debut III and RPM 1.3.

Other Pro-ject other Hi-Fi Products