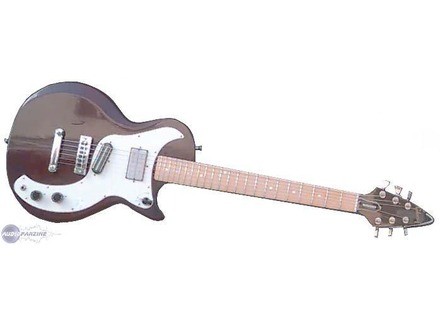 Marauder, Other Shape Guitar from Gibson.

Value For Money : Excellent Audience: Anyone
View other reviews for this product:
The Marauder was a mid 70's attempt by Gibson to compete with the cheap Japanese copies which were flooding the west at that time. Although it was never particularly cheap (around £300 in the UK, which was quite a wedge in those days) they were considerably cheaper than a Les Paul.
Mine is the original '75 production with the natural finish (there was also a wine-red finish available), maple or alder body and rosewood fingerboard. It also sports the original three-way pick-up selector switch (much better than those horrible chicken headed pots on the later models).
As befits a 40-year-old veteran the finish is not perfect and there are a few dings in the bodywork, but they always say you should never refinish a vintage guitar as it ruins the value and they don't affect the sound.
It has the original Bill Lawrence pick-ups. The neck is a standard double-coil humbucker. The bridge is not, as many people think, a single coil but is actually a specially designed double-blade humbucker.
The action has never been altered since I got it and has always been low and fast. It's a dream to play and it weighs a lot less than a Les Paul.
Sound wise I've played it through Marshall and Fender amps and always been happy with the sound. I don't play heavy rock or metal but I find it perfect for blues (especially swamp blues), country (using the bridge pick-up gives a fair imitation of a Tele) and rock and roll.
All in all I'd recommend this guitar to anyone who wants the Gibson name without the Gibson price tag.
Did you find this review helpful?yesno
Cookies help us improve performance, enhance user experience and deliver our services. By using our services, you agree to our use of cookies. Find out more.