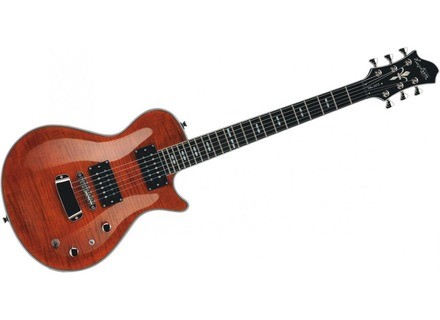 Ultra Swede, Other Shape Guitar from Hagstrom in the Ultra Swede Series series.

Buy this productView price information >
View other reviews for this product:
This is a guitar that is designed and built with the guitarist in mind who doesn't want to pay the more expensive prices to get a Gibson Les Paul. They are target market is someone who wants a nice dense thick robust tone instrument and doesn't want to spend a lot of money for it. This guitar company is relatively unknown to many people because I think companies like Fender and Gibson dominate the world with guitar and exposure, but this is certainly a decent company that provides pretty budget friendly instruments to consumer.


If you have played a Gibson Les Paul guitar then you will be right in line with the tone of this instrument. This is an instrument that can you give you a very familiar deep warm tone that you would get off a Gibson Les Paul guitar. So these are the guitars that are going to go really well with British sounding amplifier such as a Marshall or an Orange amplifier. The union between this British voiced amps with these mahogany based Les Paul designed shaped guitars go really well together. This is a guitar that doesn't look that great in fact it kind of looks dorky with the headstock but overall it's a decent entry for the money. This guitar features basswood for the body which is sort of similar to the mahogany but not quite his thick and warm sounding. However it is going to be warmer than say alder or ash body.


You can find use for for a few hundred dollars on the new markets. You can't find them easily in the used market because they're just not as popular as Epiphones, Gibsons, Ibanez, Fender guitars. These are decent budget friendly guitars that sound decent for the money.
Did you find this review helpful?yesno