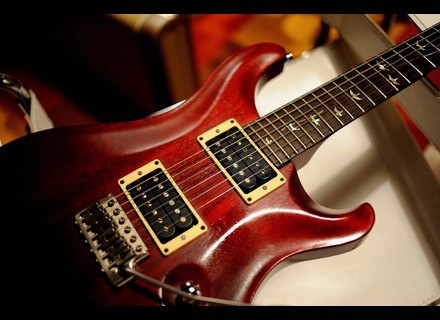 PRS 20th Anniversary 24 std
5
One thing is for sure and that is Paul Reed Smith guitars are simply amazing. To build structures of quality there use materials and the overall pants and look at just fantastic. There's a great tone if you're used to Gibson guitars than you be right in good company with the tone of his guitar. Has a very reminiscent tone to Gibson guitar especially Gibson Les Paul guitar.

It features mahogany wood on both the body and back and generally eight fingers or quilted top on the body. He usually comes two humbucker pick ups with the volume and tone control knob. It generally has less features than a Gibson Les Paul guitar because it has one less volume control knob however it has a neck that is somewhat easier to play up in the higher registered frets. Since the body is a guitarist cutaway much more than you don't have that problem where the body of the guitar gets in the way of the higher frets like you would a Gibson Les Paul guitar. This is more in line with the Gibson SG guitar where you have a two cutaway on the guitar's body.


The tone of this guitar is fantastic and very warm throughout. The overall voicing in my opinion is not as good as a Les Paul because I just don't feel that it has that certain soul or character that a Gibson Les Paul guitar pass. It's a fantastic tone and certainly a tone that many guitar players look for. Don't give me wrong this is a fantastic guitar has plenty great tones available throughout it but it is second place to get some Les Paul guitar. I feel it has a little bit more versatility than a Gibson Les Paul guitar has though because of the shape of the body and the ability to hit the higher frets much easier if you're so going up there. Plus some what of the tone appears to have more tones in line with the Fender Stratocaster didn't get some Les Paul dots. And what I mean by that is this guitar cleans up very well so if you're using a clean amplifier your to get some nice Chinese clean tones are you wouldn't get for me get some Les Paul guitar.

So many country players and clean amplifier guitar players will grab this guitar over many other guitars especially to get some Les Paul guitar tones. This guitar sounds absolutely fantastic with the Paul Reed Smith guitar amplifier. Their guitar amplifiers primarily feature clean tones up to moderately overdriven tones. And these guitars just sparkling chiney clean setting. You're not getting get a good clean tone from a Gibson Les Paul guitar to matter what you do to it.


I would recommend this guitar to anyone is looking for probably and more versatile guitar with the ability to play anywhere from country to metal tones. These are very expensive guitars and not for the person is just looking or tire kicking. If you're serious about a professional instrument then this might be the guitar for you.
Did you find this review helpful?yesno
»

PRS 20th Anniversary 24 std
1
manufactured in us by homer simpson .... how serious I think it sucks

bababah too bad the handle is not pleasant, ergonomics is not good no access to acute (because the wood nettle)
we not get a good sound even in a good peavey transo

sucks, has years of light millnot's st
Did you find this review helpful?yesno
»

Style Channel Highway
Standard weight of a quality guitar
Good variety of sounds thanks to the various combinations of the selector.

Pop, jazz, rock, hardcore, metal: very polyvalente.C is a guitar to sound modern, less suited to blues music and roots.Le neck pickup gives a warm and precise style PAF but a lower fat LP with excellent sustain.
Chords and arpeggios property définis.Une positions gives crystal clear sound perfect for funk and rhythmic support.
The bridge pickup is more modern with a big power and excellent accuracy in the bass. The notes stand out even in large harmonic saturation.Les leave without a problem!
I plug in a Fender and a ProReverb Twintone Koch II, so a more vintage sound and the other modern.

I use it for 4 years in a professional, in addition to a Start Plus Deluxe.Ce is not a guitar to do violence unlike my Start which is a bitch who deserves! It imposes a game more "delicate." I'm originally a Start player, I had an LP at 74 that I quickly resold. I prefer the single coil pickups with humbuckers but this one has me séduire.Musicien since, uh ... 40 years I have had many guitars in their hands.
But too expensive. I bought new for 1500 euros, which seems to be the price it should be vendue.L previous notice had to be posted a day after cooked and is stupid! Perfect finish (see a Gibson vs. understand!) , versatile, reliable (use pro). Very good tool.