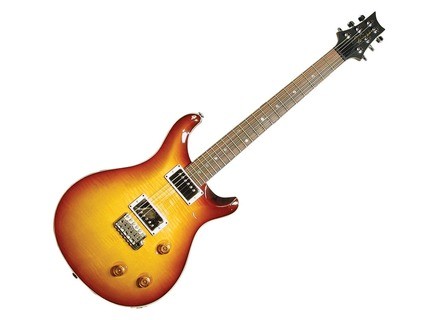 CE 22, Other Shape Guitar from PRS.

PRS CE 22
5
I had this guitar special ordered new by Guitarville in Seattle for $1,575. I'd seen new and used CE 22s and they were all beautiful. But I didn't come across a solid black one like I'd hoped. So I ordered one. 3 months later, it was in my hot little hands.

The first thing I noticed about the CE 22 was how wonderful it felt to play. Moving across the fretboard, bending strings, and playing bar chords all felt smooth and effortless. More than any electric I'd played. The wide-fat neck gives my frethand a sturdy grip and allows for quick movement. The Dragon II pickups are nothing short of stunning. Such full sound and versatility. The 5 way rotary pickup selector takes a little getting used to, but once familiar with it, switching tones is easy. I've been a strat man my whole life and am not really into the heaviness Gibsons. So it was nice to discover PRS's warm midrange sound that is a nice contrast to my strat's sharper sound. And my PRS is GORGEOUS!!! Black is Beautiful!

The only thing that threw me off a little about this guitar was the locking tuners on the headstock. Changing the strings for the first time was kind of a pain and I'm still not used to it. But I suppose a little more experience is all I need.

Solidly built! Before buying I was able to view the Paul Reed Smith DVD that gives you the factory tour. Nearly every step in constructing their guitars is done by hand. And they give the impression that their quality control standards are incredibly strict. I enjoyed viewing the step by step process of how my guitar was built. And now that I've been playing it, I'm very impressed with how sturdy it is and how terrific it sounds. Even after lots of string bending and whammy bar torquing, the thing stays in tune. Wow.

I'm very pleased with my gorgeous black beauty! At first the price tag seemed a little steep, but the more I play the more I feel my money was very well spent. I guess I would recommend looking for a used one if you wanted to spend a little less money. But if you've got your heart set on a specific color, good luck finding it used. Because everytime I saw a good deal on a used CE 22, it sold pretty quickly.

PRS CE 22
4
I walked into a guitar shop in Bondi (Sydney, Australia) which was having a closing down sale. They had some Paul Reed Smith guitars going really cheap - The CE22 was listed at $AUD2000. At that point in time, their standard retail price was $AUD3295. I bought the guitar because I love PRS guitars and I really wanted one!


I love the neck shape. It's a Wide Thin neck which is very similar to the neck on an
early 60's Strat ( I love them too ). The frets and the quality of the rosewood make the
neck extremely fluid and smooth to play. The Dragon II humbuckers provide a
huge-fat guitar sound that is great for alternate rock music.


Most bottom level PRS guitars can have either a Stoptail piece or a Tremolo system.
Mine has the Stoptail. The design of the Stoptail is "not that great" in that it forces
a fairly brutal angle on the strings which, I believe, results in A, D and G string
breakages from time to time. I also don't like the 5 way rotary switch for changing
pickups - I prefer a toggle, like a Strat. Some PRS guitars do come with toggles.


PRS are known for consistent construction. The guitar is put together VERY well
and is sturdy, yet light. The finish is flawless (er... was flawless).


I definitely got my money's worth. It was a freakish bargain and I was lucky to be
in the right place at the right time. I could probably get my money back on it in a
second sale if I wanted!

PRS guitars are awesome. However, some of the things that make them
awesome for some people, may make them ordinary for others. Try before you buy.
One thing that I think makes PRS guitars so good is their necks, and particularly,
their WT (Wide Thin) necks - these are great for hard hittin, small handed players
like me. The body shape LOOKS fantastic, but I prefer the contoured feel of a Strat.

PRS CE 22
5
I got this guitar at Accent Music, they are not a regular PRS dealer and it was odd that they had one, but it was on consignment.

When I first played the guitar I was completely blown away by yhe sound. I love the 5 way rotary pickup selector and the pickups. The guitar is very well built and is worth every cent that I paid for it. The guitar has a great neck and fretboard. The guitar has the Wide Fat carve and it feels great and is very fast and smooth to play on. The fretboard is also great. It has a good radius that makes it east to bent the strings but also at the same time it doesn't give the bumpy ride that other similar guitars give when you try to slide. The tremolo bridge is great and never gets knocked out of tune when you use it.

The only thing that I don't like about the guitar is the way that the strings go on the guitar. The guitar has the locking tuners and I feel that they are a royal pain to get used to.

The construction of the guitar is great and I have never played a more solidly built guitar. The quality is great and is by far the best on the market and also like all PRS's this one is great to look at.

If you are looking for a new guitar and want something that is very versitile look no further than the PRS guitars because they are very very versatile feel great look great and most importantly they sound great. The downside to these guitars is that they are a bit expensive but you really get what you pay for with a PRS.

PRS CE 22
5
The PRS CE line was their line of bolt on guitars. They had these guitars before the SE line of imported guitars. These guitars were made in America like the other PRS guitars but they were cheaper due to the bolt on construction. These guitars also came with all the features of the USA made PRS guitars but were still a bit cheaper. Nowdays a used CE model is the cheapest way to get into a USA made PRS. The guitar has a mahogany body with a maple top. It has a bolt on rock maple neck with a 22 fret rosewood fretboard. The neck on this example was the wide fat neck. Up top on the headstock you get PRS's great locking tuners, something you dont get on PRS SE models yet. The bridge is the PRS vintage style tremolo. The pickups are PRS Dragon pickups which are nice. The controls are the old PRS setup since this is an old PRS. You get a master volume and a master tone and a 5 way rotary pickup selector.

Even with the bolt on design this PRS retains its playability. PRS was clever in the design of this guitar. The bolts for the neck are pushed back way under the neck pickup so the heel of the neck is no bigger than it is on the set neck models. It feels just like a set neck model with a raw neck. The locking tuners are great and they hold tuning well. I love the PRS locking tuners because they are a very unique design. They didnt just copy some aftermarket locking tuners, they made their own. The tremolo is very stable and it didnt cause me any problems when playing normally. I do not normally use a tremolo so if the guitar can be as stable as a hardtail I think it is a good tremolo. One thing I hate about these older PRS guitars is the Rotary pickup selector. You never really know where you are. There are 5 positions and they all look the same essentially.

While this guitar originally came with Dragon II pickups the owner found some original Dragon I pickups and swapped them in. These are both PRS pickups but they are totally different sound wise. The Dragon II's are more of a mid level output pickup with an overall bright sound. The old Dragon I pickups are very high output. They have a big dark sound which is great for heavy music. They werent really designed for heavy music but they work well. It is unfortunate that they are so expensive to find. Even with the big dark sound and the huge output the Dragon I pickups are very articulate. They are very sensitive to dynamics which is hard to find in a super high output pickup like these. They respond very well to the volume and tone controls. PRS is one of the few companies who I think could do very well selling their pickups aftermarket.

If you are looking to get a PRS you should see if you can find a CU model for cheap. Nowadays you can get these guitars for less than 1000 USD. That puts them close to the price of a new PRS SE and they are a lot more guitar than a PRS SE. I think finding a CU model used is the best way to get into a real American made PRS guitar. A guitar like this is a stepping stone into a PRS Custom model or something cool like that. Even as a bolt on the PRS bolt on design is so nice they feel just like the set neck guitars. If the choice was between a PRS SE model and a PRS CU model I think the CU model wins hands down.

Did you find this review helpful?yesno
»
Read the 8 user reviews on the PRS CE 22 »