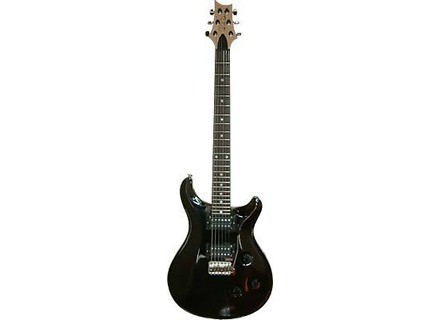 PRS CE 24 20th Anniversary
4
Guitar factory in the United States
MODEL limited edition for the 20th anniversary of the brand
Channel 24 boxes screwed Indian rosewood fingerboard
Mahogany body
Schaller mcaniques wraps specially Designed for PRS
PRS tremolo bridge and
2 humbuckers and split singles (Vintage bass in the neck position and HFS in the bridge position)
In any case, the finishes are beautiful (dcoupe of the head, again in abalone button ...) and this guitar is generally a Russianness Aesthetics, even if the d Cutting the body m&#39;voque some of her fellow sizes for more stuff "mtal" (some ibanez SERIES S, Parker or even, Schecter), which I lamp to cool a little

In terms of use, this guitar is a real gem: the neck is super thin and comfortable (may be even the best run I&#39;ve ever given to try t), the button allows incomparable fluidity of play (a slip alone, a highway!)

Access in acute is trs li ais dcoupe the guitar.

The guitar is relatively lgre a mahogany body, lighter than a Gibson Les Paul, but heavier than a Start.

This guitar Submitted ingniosits also some of the best effect, as Systm mcaniques of which block the rope by a system that thread, which quickly that it does not jump when you stretch (useful when you change strings, what happens when even frquemment), or the stem of vibrato which is introduced directly into the receptacle without you needing to screw it for 3 more heures.En ingnieux to be the rack and mcaniques dgagent really an impression of quality (robustness of matrial) and even in reliability were bent on a do the vibrato ( trs remaining flexible and much easier rgler that shit pink floyd), the tuning does not move a muscle.

The only criticism I would make in terms of use on one hand, the lack of two buttons Tone combination that I can because I think prfre greater range of possibilities and rglages s sound, hence I had a lot of difficulties cut me a sound that suits me, but I will;

On the other hand, the micro slecteur is really bad, the numbers listed are not really readable and contribute nothing to select the five positions, suddenly, we find ourselves obliged to as well as manipulate the knob in the position qute wishes. Damage and annoying, as everything about the user experience seems to have pushed t its peak. Obviously, someone at the PRS dtail oblivion, unless they did not want DEFINITIONS crushes competition in terms of perfection ...

I might be in Heuter more than one, but it is here that this guitar me most of. No, I do not prtend the sound is awful, quite the opposite, but I never learn russi the sounds I&#39;m looking for and stick my style;

Indeed, both HFS and Vintage Bass pickups sound too modern and too clean (even with a saturated fat, is a clean, some CHARACTERISTICS apprcieront) for me its looking for a more "vintage" and "dirty". Moreover, I find the bass too "soft" (this despite having swapped the original set of strings against a 11/52), and the overall sound, far too rich mdiums; other hand, the lack of microphones got my personality, are not enough typs (unless you typs Whereas they are "modern") as may be microphones Start or Les Paul in their respective registry.

In addition, the positions intermdiaires, to completly splitter in the single-coil pickups, even though I believe are the most INTERESTED at the sonic palette on the type of sound I&#39;m looking for, do prsentent no big diffrence from each other.

A good point, however, the RSID almost infinite sustain and holding of notes: it&#39;s really enjoyable to swing big deals with the scratches!

So, to résumé, I would say that the scratch (with the config of microphones, it should be possible to obtain sound more "vintage" in replaceable micro, by Seymour Duncan or Mccarty ) is perfect for all kinds of music "current" gender mtal naked and drives, as well as things like pop or varitoche (due to lack of personality microphones) on the other hand, hard to obtain sound more "roots" to the blues and stuff like psychs 60s. In any case, at least I srement replaced the bridge pickup!

In conclusion, this guitar s&#39;avre be a marvel in the use and usability (simplicity except for knobs, ultra comfortable to play, innovative for several reasons ... c is really what I sduit compared the scratches on the LP and Start). In contrast, the bottom line is that the sound of me (warning, the sound does not matches my expectations, just as the first test store, it pleased me. But there is always a diffrence between a trial store in conditions, or not always great to get an ide prcise (you do not play on his gear or amp, you can not play too loud or well you are covered by other "testers") and use at home in ideal conditions (playing hard on his amp, I use a Peavy Classic Custom 30, or effects that can have a big impact on and rendering the final) so that I did not keep this guitar a long time and I came back both of my first love: Gibson Les Paul and Fender Stratocaster that have a much more typical of the tone more subtle and with whom I immediately found "my" sound (I play rock mlant post rock, alternative and exprimental and sounds like vintage 60s type), while j &#39; I spent hours on the PRS but failed to find a grain (this guitar sounds too bright) and a sound that suited me (got my bass too feeble, too mdiums, whatever the configuration of microphones) . So even if the PRS is much more comfortable playing a Les Paul or even a Start, I prfre widely both the sounds for their IMMEDIATE identifiable, their grain inimitable and I&#39;d be tempted to say, their "my". In short, fans of vintage sounds or trs typs, go your way, for others playing mostly music "current" (nu-mtal and drive), this guitar is for you!

However, I DEFINITIONS my judgment Reserved because I&#39;m not saying I do not Rasht later, but by changing the pickups in place of Seymour Duncan 59 and JB, for we must recognize that this I was really scratching won in terms of comfort and violin / usage.

sade's review (This content has been automatically translated from French)

PRS CE 24 20th Anniversary
5
Made in America
24 cases
Vintage Bass in a microwave bridge and a bridge in HSF
PRS vibrato
Mcaniques ropes with quick mounting block.
Mahogany body, table stocky, round rosewood Saddle.
1 Tone one volume, one for the config rotoactif microphones.
-1 For micro slecteur not practical. Lighter than my Start is little fatigue sets in 1:30.
Perfect finish.

Channel carefree. Good Access in turn aigues.Prise trs enjoyable, a little more pais than my Start Plus trs but comfortable. Highly polished frets. Little tiring to use.
Guitar lgre enough compared to my Start Plus but a bit less ergonomic (dcoupe level ctes).
The Vintage Bass is excellent, full of roundness, grain enjoyable, type Santana saturation. The configuration of the microphone allows for sounds like "out of phase" for the rhythmic lgres (funk and others). HSF provides a modern sound, trs prcis, many harmonics, large level sortie.Je have yet to explore it for giving notice DEFINITIONS. Fewer characters than SH4 JB Duncan but more versatile.

Playing anything and everything with anybody, I need versatile guitars.
I plugged into a Twintone Koch.
Finally a guitar team of humbuckers that I am a convienne.Je Stratman DCEN for many ...
Less fat than a LP while having a big sound full of finesse. Sustain impressive is not envy one LP.

I've had two weeks. The sound suits me parfaitement.Depuis 30 years, I had the opportunity to have and really try to guitares.Travaillant with music stores, I ACCS a multitude of products. I like the sound of the LP but dtest ergonomics, weight and finally the price prohibitive for the level of finish.
+ Finish, weight, sound, set.
- Dtails ergonomics, slecteur microphones.
No regrets because I n'achte not my guitars on the spur of tte.Parfaitement complmentaire of my Start. Well done, good sound. A professional instrument.

nicowheel's review (This content has been automatically translated from French)

The handle is nikel a motorway, ideal for the solo. We can shred without problem. The access to acute is easy, no problem cutting through the body.
IT is true that ergonomics therm this guitar is great. It is not too heavy and it is comfortable when we play with. It's not a Les Paul ...
Her look is not bad. A well cut PRS. A pretty face for the metal, but not only ...

HIGHLIGHT: We can strive vibrato, it does not move a hair.
LOW POINT: To select the position of the microphones should be turned with a Knob scale of 0 to 10 unnecessary, just for decoration. A little boring to know exactly what mic you play, especially if it changes often, but not a problem for me.

I play mostly metal, but we can all do with. From blues to metal to rock, funk. This guitar provides serious. It depends on what you want to do. It is versatile.

In the neck position sound is very round, warm, but perhaps not quite to my taste. It sounds sort of fine bluesy, very comfortable in this style. In intermediate positions, that funk groove that it provides. And she has good sharp, perfect for the solo.

But to me his strong point, the big sound it out in the bridge position for very heavy styles (rock, metal mostly), micro positron FHS easel ensures max. He has a good offense and a good presence, good bass. It can even enchainer heavy metal riffs, it comes out heads held high. Good riffs to Metallica or Iron Maiden does not frighten him. But not ideal for the death. (It's not an ESP or Jackson ... to try with EMG 81)

Personally I play neo metal, it is that it provides. I used it with a Line 6 spider 2 head. The sound was good but denaturalized (modeling requires). Now I plug in a ENGL Powerball. And here is the slap in each agreement. Great sound PRS supercharged by ENGL.
Before buying it I tried SG, Ibanez, Jackson, and when I tried, I was bluffing because it emanated from the others. Clean sound is beautiful, she has the body.
It may lack some personality. It does not sound like a typed Lespaul or Telecaster. A modern sound, but its PRS to sound differently according to the amps
Simply perfect or almost ...

I use it for 1 year now.
-What I like almost everything.
-What I do not ... Internet is not over.
-As I said, I tried several before this one and there was always something I did not like the others.
-Suitable for all styles, but it is better to try it, like anything else. Everybody does not apreciate.
-The price / quality ratio is especially interesting for the quality and also for the flight case that is not given. I buy 1500 euros, for this price especially in PRS is not crazy to look at our mouth Gisbon for example, in the same price range does not necessarily equal quality.
- Of course I would do without hesitation that choice even if I would have liked a Singlecut but too expensive.