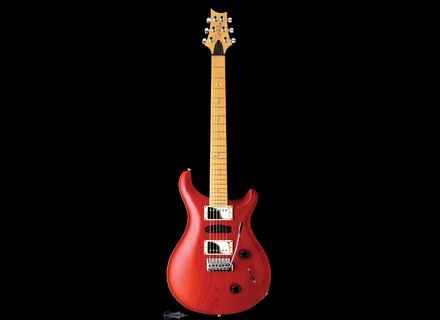 el Katra's review (This content has been automatically translated from French)" Ex-cell-ente!"


The last config with a selector 5 pos. and the push-pull provides all useful combinations, it's great.

I put a little time to myself to handle the wide fat in the PRS is not my thing, too fat and 22 boxes I'm not a fan. I love their regular round and thin wide. But I had no choice: An all maple neck with PRS is rare!
The touch, the feel of this guitar is its strong point and once you get used to it, this guitar is a highway to the fun! It makes me want to play every time I look ... AH yes I forgot to say, but it has, I have a beautiful version sunburst front and back where you can see the wooden handle and a butterscotch color worthy of a reissue telecaster 52. IT IS BEAUTIFUL!

Excellent ergonomics and pleasantly light guitar (compared to other solid body PRS) of course there are the woods for many here. Again I say: when we know, this guitar triggers cravings play just by seeing

Almost perfectly fair (it's still a guitar ...), like very good agreement. It's PRS USA there is no surprises.

Very, very versatile guitar. It's like a Swiss Army knife: I use session in studio or when I can take a guitar and I do not know what they will ask me as a style or I have to cover several.
It presquee all and does it very well.
I play many different types of amps, classic wholesale primarily (fender, marshall, mesa boogie ...)
We go from Strat Gibson type, it covers all types of classic sounds we can expect more electric. We can push for metal but hey it is not made for that. Otherwise, lightly playing volume, tone and especially pickup combinations you can do anything, and she does it well.
I also use it sometimes to arrahce direct dna sla console or with a pod, the fact that nickel after mixing.

I'm a fan of PRS McCarty I already mounted on another guitar. It has a very bright spectrum for dual and thus playing the tone, they offer a wide range of sound. And as they splittent more, the versatility panard level.

I do not know the vintage rail Seymour Duncan: very good surprise. It corresponds perfectly to the rest of the guitar and the complete intelligently.

Almost a year with that of happiness.
I was in a research phase electric quitare versatile without sacrificing sound quality. I assembled piece by piece, a strat, a TV I bought, sold, changed a lot of guitars and everything stopped with the PRS Swamp Ash Special as I found what I was looking for: the versatility with quality, stable trem, a fun game, and look fabulous.

I'm a fan of PRS USA I had a Custom 24, a McCarty Hollowbody II, and I mounted them on a micro scratch or two but I do not expect to find such sounds natively in PRS. They are often mahogany body, mahogany neck, rosewood fingerboard, mahogany and two big, modern double. But I'm a fan of their McCarty and when I saw they were in a nearly Swamp ash, maple bolt-on neck fully and wedged between two vintage rail McCarty + tremolo I said trying to see. Finally it is "the least of prs prs" but GREAT SURPRISE!

I would do this choice without hesitation ... and if I sell this guitar one day it will only be to control PRS almost the same with one or two good options for me

Value / very good price. I paid 1500 Cygnus and at that price when the beast we know, do not hesitate.

I'm not too familiar with this type of race but because of a small pitch the game is simple ..
The guitar is very well balanced light
access to the tweeter is relatively easy due to a refined heel
The sound is the big highlight of this guitar

I play blues rock covers of pop songs ... 60 very diverse and this guitar is extremely versatile sound was "Gibson" on the double that they become very strata are splitted it is superb!
We keep a tiny bit of the PRS on the sound is very nice double qi
The sustain is important ... You can play without anxiety Carlos Magno
I play with my usual set digitech 2112 artist + peavey 50/50 on baflles 2 * 12 V30
I like clear strats (critallins but not aggressive in the treble) and saturated Gibson!

I played with for 5 days ... I would do a review in a few months ...
I had a PRS CE24 model was heavier and less versatile ...
I own a Vigier Excalibur, a Jackson SL1, a strat
this guitar is a gift from my wife .... yes!! she looks a fall down a perfect finish sound terrible we feel downright guitars have 2 different configurations depending on pickups ...
The price / quality ratio is excellent because it is a gift <img class="smiley" src="/images/audiofanzine/interface/smileys/icon_wink.gif" alt="wink" />
having said that I bought OCCAZ in a near mint EUR for 1400 I find excellent value for money