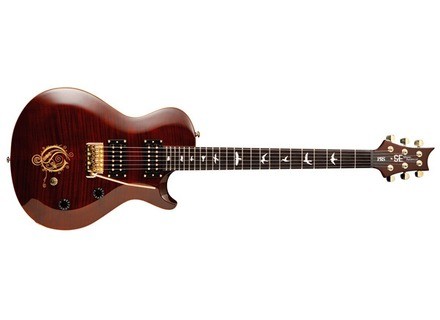 PRS SE Mikael Akerfeldt - Tortoise Shell
5
The PRS Mikael Akerfeldt guitar proved to be one of my best choices among my musical equipment. I've owned mine for five years now and I've used it to play all sorts of music with amazing results.

It is an SE model, featuring a sort-of-Les Paul shaped body of maple wood with a particular shell print on it. The neck is maple, ebony fretboard (with a sort of satin in it that is actually helpful to avoid unwanted sliding), wide neck, 24 jumbo frets, and the typical PRS birds inlay (though I think this was one of the very first SE models to feature them). It has a tone knob, volume knob, a three way selector (positioned below the strings, as in a Stratocaster). All hardware and pickups are PRS designed: treble is the PRS SE HFS Treble, and bass is the PRS Vintage Bass, and the name describes perfectly the sound of this particular pickup. The bridge is a PRS Designed Tremolo, the tuner are the standard PRS Tuners, and the hardware is gold (which makes for a very classy look and requires a lot of care).

The guitar was excellent out of the box. With a beautiful action, a comfortable shape and a medium weight, it has been my companion on every gig for the last five years. As this is the custom model of Opeth's frontman, Mikael Akerfeld, the guitar is designed to cover his needs on the band. Luckily for everyone, these include fingerpicking, lead work, rhythmic work and frantic riffs, so the instrument is quite versatile per se. As stated before, the satin finish of the neck makes for a quite comfortable play. The very sharp bridge makes this guitar a sort of string snapping machine if you abuse the tremolo, so that's a minus.

As it was made to cover Akerfeldt's needs on the band, the guitar works best for clean, dark tones, bluesy leads, and extra heavy riffs. The pickups can deal with 70's singer songwriter fingerstyle sounds as well as the most intense death metal distorsion.

I've run this guitar through some VOX, Marshall, and Mesa models, and the sound has always maintained its characteristic bass darkness and richness. The tone may be a little lacking for things like classic rock and such, but the variety of music you can face with this guitar totally makes up for it.

I find this an extremely stylish, comfortable, and versatile instrument. Back in 2010, I tried at least twelve PRS guitars before getting this one, and I haven't regretted my decision for a second. I even tried other SE models and I found none as this good for fingerpicking. It is totally worth its price. The hardware has worn out a bit with time, and the knobs have to be cleaned with some regularity, but that's rather normal in Korean made guitars. The tuners are excellent too, they have rarely failed me. I would definitely make the same choice again.
Did you find this review helpful?yesno
»

heads on fire's review"Great guitar - could do without the logo."

This is a nice import axe from PRS! The SE Mikael Akerfeldt is the new signature model from the main writer of the versatile Swedish band Opeth. Akerfeldt is the primary rhythm guitarist, and does his fair share of wicked lead work, as well as having many rich clean finger-picked passages, so this guitar was designed to do any and all of those things - usually in the same song! The fretwork was nice, and the neck felt fantastic in my hands. I like the 24 fret single cutaway design! The tremolo is very smooth like the USA models, and I'm so glad to see the bird inlays on an import model. The finish is a nice rich brown/red, and the guitar has the big O logo from the band - that was the one feature I could do without.

As previously stated, this is a highly versatile tone machine. The pickups can do death metal with ease, but also 70s prog solos, and folky Nick Drake fingerstyle tones. Opeth is one of the most diverse bands out there, with influences all over the map, so this axe can do jazz, fusion, rock, blues - anything!

All in all, this is a great guitar. The one thing I could do without was the big gothic O logo on the face of the guitar. It seems like so many metal bands' import signature guitar has some sort of readily identifiable at distance band logo plastered onto it, and I'm not a fan of the idea - it just seems tacky to me. Other than that, this guitar rules! I'm really looking forward to trying the Fredrik Akesson model - he is the lead guitarist of Opeth, and if it's as good as this one, then PRS will have two big winners onhand!

norvegien's review (This content has been automatically translated from French)" satisfied"

handle very nice, 24 cases, the touch is very soft, as if we have sanded a strat slipped while maintaining a fluid, and not so shiny patent gibson.
always a pleasure to play with

the highlight is the micro h grave, great for blues or some lead in saturation for the high distortion is large so that it sounds if anything, the knobs are simple, do not expect to have the same sound Opeth, they do not play on the same models, no piezo, and all of the same sounds less rich but the budget is quite accurate

this guitar is a simple and effective for the sound to the aesthetic, with a beautiful finish birds, prs style without a credit of 15 years, another personal opinion; tuning a monitor but it is probably of the habit of playing with a ibanez floyd equipped with a