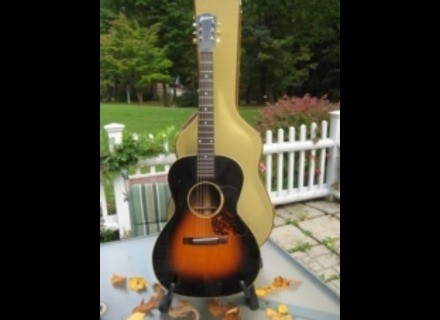 Gibson L-00 (1936)
5
This is a very in-demand acoustic guitar, one that hasn't been manufactured the same way in years (since the 30s). I'd say that the best thing about this guitar is its smooth, rustic tone. The guitar has no binding in the back, only top binding (the L-00 later, after 1937, was given back binding). The guitar has a really nice rosewood fingerboard, which in the case of mine, has aged fantastically. The top of the guitar is spruce, while the rest of the body is a rich mahogany. There are 19 frets. There are no pickups or knobs as the guitar is an acoustic.

The guitar is limited in the sense that the last note that can be comfortably reached is on the 15th fret. Therefore, it's not great for leads. But nobody buys an acoustic guitar from the 30s for playing leads anyway, so I doubt this will be an issue. The guitar isn't too heavy, it feels good to hold and play. The sounds that emerge from this guitar are almost always fantastic. It has a rich, warm tone that really carries a tune. The drivers on my guitar are still stable, but that's mainly because I've had to do some work.

I love the tone of this guitar. I think that strumming along to any song, be it rock, blues, or country, would sound equally good. This guitar is great in that it doesn't really have a distinct tone of its own, it really does seem as though it's entirely up to the player. I've been able to get this guitar to smoothly accompany a folky tune, to get a twangy picked sound for country songs, and to simply drive along a light rock song. The sound is so full and powerful that I really doubt anybody wouldn't want it, it's one of the best steel string guitars I've ever played.

I think the best quality of this guitar is the sound. Since my fingerboard is still in really good shape, I'd have to say that the second best thing about it is probably the playability. The price is definitely going to drive most people away, and that's because this thing is almost an antique nowadays. I was lucky enough to inherit mine, so most people won't be playing it. I actually might sell it soon mainly because it is worth so very much. But I don't really want to, as it's an amazing instrument.
Did you find this review helpful?yesno
»

Other Gibson other Steel String Guitars