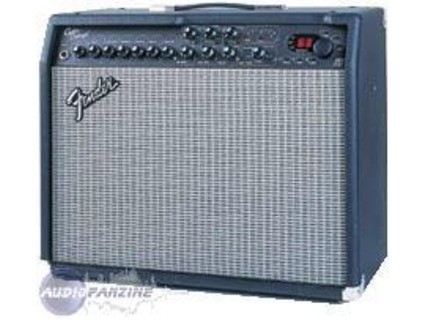 All user reviews for the Fender Cyber Deluxe

triptonyo's review (This content has been automatically translated from French)

1 line guitar, an input / output effects rack, a standard line out, 1 line out "amp simulation" very practical and very realistic to save without putting a microphone in front of the hp, 1 headphone, 1 entry expression pedal

1 foot 4 buttons to navigate between sounds. Warning there is a little latency to change sound a bit boring being piece ...

Frankly it is super simple to use and take control without manual.
In contrast settings of the delay (feedback, delay) are readily accessible in real time.

The sound is not worth a good tube amp (but do not forget the price for this power amp with full multi-effects built hot rod deluxe style ...), but by tweaking the settings is well more honorable.

I play post-rock, with lots of delay, reverb, and sometimes vibrato. It works well in this case.
I use a poor copy of the paul (jim harley), until something better (and more money ...)
Sounds delay + reverb + tremolo is a little impeccable. But his clear and saturates Fender type should not put it next to a hot rod deluxe.
Saturated fat good good for metal (so I avoid)

I use it for 1 year, I love the effects and having a tuner and a direct simulation output amp is what makes me hesitate to change it. At the time I tried too few amps before buying it.
But whenever I can I opt for a hot rod deluxe with a pedal-memory man electro harmonix is ​​still another sound.
The price has dropped, if that is what we seek (ie, a super multi-effect with a more than not drinking but still light) the value is excellent, especially around 800 secondhand euros. It's still super stuff.
With experience, I do not do it again this election but I get a little demanding at its ... when one has tasted the lamp difficult to go back!

Jacquou's review (This content has been automatically translated from French)

Fender Cyber Deluxe
5
Modeling Amp
65 W
Side conection, it is well equipped, I'm not going to go into detail but everything is there.
Side look, it remains in the Fender tradition, thus far it is noticeable, which is not bad because it prevents the public warned to rush on stage to take the references of stuff!.

The simulation can quickly get the sound that corresponds, in the case of recovery just know which amp was playing the guitar, I find these highly realistic simulations.

The manual is well done, except the side at noon that my taste is not well explained (especially for novices like bibi !!!!)

My music style is blues rock, but sometimes I lose myself in the world of hardcore.

I play on Fender (Telecaster, Stratocaster) and LINE 6 (Variax 700)

His side, I'm still not back, I who had played only on tube amps, and although I must admit that we quickly found his bearings, clean sounds are nice, sounds very nice crunch, and saturated fat that kills it is also simply good tweak the settings and push the bass.
on the other hand I found the factory sounds unworkable (too many effects).

I really have no complaints about sonoritées because for me they are of impeccable quality, it is true that I have a soft spot for the crunch but its just my style of play

I own this amp for a month.
It is very versatile but retains a personality Fender, which is a plus compared to its concurence.
I tried a lot of amps in the 65 W class and there's no photo, it stands out against Marshall - Flextone 3 - VOX and other modeling amps.
Attention as prices quoted by store the other you can have more than 400 e variance for info it is easy to find, I bought a small shop in Aix en Provence.
When I understood the management of the South, and I can load sounds into my computer via the beast I'm on top!
A small criticism on Cyber ​​MIDI Foot control is expensive (450 E) and in addition was not found.
I am fully satisfied and I recommend this choice.
That the "purists" try before criticizing modeling !!!!!!!