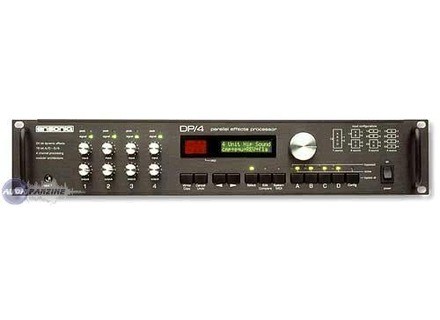 View other reviews for this product:
Do not buy scam artists who sell 600 or EUROS ON + AF!
Brought you two for the price by seeking a minimum.
4 effects processors routed in all directions with tlcommande paramtres in the afternoon.
I wish I had more control with preset paramtres twelve o'clock, the two were possible by paramtres effects dja is not bad! Especially we can choose absolutely any of paramtres

Note that in addition to control change can we control the effects of the VLOC a keyboard, the note, aftertouch ... and even in the CV!
This is good, yet another fawn playing with effects.
We can choose the depth of action in order reues noon: a Manir gnrale in the main config but especially because it's stock memory and it trs trs useful to avoid saturating the output or limit a rsonance.

CHARACTERISTICS trs level is good. Then we have to look at Kurzweil, Eventide for a multi-effect somewhat similar but does not play in the same CATEGORY price and opportunity.

It takes some time to dip the logic of presets ROM / RAM / CONFIG
take her back between the config 1U / 2U / 3U / 4U and routing parralle SERIES feedback, especially with the half-manual found on the Internet.
But it is logically organized trs and navigation is simple plutt. It's like everything's just a matter of habit.

Some effects are multiple, we can find an example in a single preset UNIT phaser a dot of an LFO that can turn on / off phase, we can switch the LFO sample & hold, all followed by a line Stereo delay with rglages L / R and to finish off custom settings steering noon.

So ... the dj was going to be hot to combine four effects on the four units seen your exact a single unit, it is powerful!
No MIDI sync effects other than the well-named TEMPO DELAY so you have to get out the calculator and other delays.
The biggest concern for both the speed of the module that is not expressed in ms, so it's ear.

In terms of pure quality is bad because it is not transparent ... and it has done is good and it sounds great!
It is prfrable to have a good clean ct processor to cover all the uses I think. For reverbs in particular, in my case I was sometimes lacking.

I'm a fan of modulations and reverbs and other non-linear, I love making my clothes, make flanges with delays, reverbs and delays with etc..
There's really sounds egg out, if you like.
Saturations and amp simulations are useful, even if they remain numriques they are nice there are plenty of things to do with, glad to have them.
It is almost mandatory to include a noise / gate at the end of string with Satus There's noise because according rglages.

The DP4 can gnrer its own sound, with the oscillator is basically Intgr but also by playing with feedback and that's good because it can INTERESTED "replace" this little synth a quietly Thurs Especially if you your follower of sampling.

Are often found in the EQ algorithms and the hair is because it does not always respect the Aiges.

Here are just 3 or 4 shots mconaissables electronic percussion in the algorithm Flanger-DDL (using a single unit) that I modified, the rest is the module that DP4 (problem of resonance n 'not optimistic that the race of knobs):
DP4 ( http://digitalementconverti.free.fr/d%e9mos%20effets/Ensoniq%20DP4/Spiral%20Flange.ogg )

This is a box that invites you to crushing, there are enough presets paramtres in order to be prcis but not too much, it's back.
It can be used as a standard processor and confined to an auxiliary table mix using presets, but it's a shame, it's enough to look for new sounds with the processor 1992.
Not exactly young but it is always the page!

I love and I want more, I would take can be a deuxime as an insert on the machines it's really good to combine the effects of the sudden I ... nothing on my assistants.

Trs good machine!
See the source
Did you find this review helpful?yesno
Cookies help us improve performance, enhance user experience and deliver our services. By using our services, you agree to our use of cookies. Find out more.