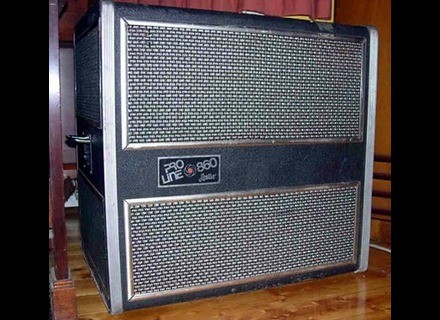 Leslie 860
4
I use it for over 2 years. Previously I had a Leslie 760. Level dimension, almost half of 760, with a power even higher. The power reserve is simply impressive on this little Leslie. Also in weight, it's a real pleasure to move and carry, with about 45 kg. It is placed vertically, even in a small car.

It is equipped with exactly the same horn as 760, with the same engine. It is therefore not surprising that it sounds (top spectrum) as a 760! The difference lies in the bottom ... As Leslie is smaller, it was unfortunately not possible to put the big fat 15 inches found on most of Leslie, but only on December 1 inches. And there is not the same sounding than a 760. We must therefore say at once, for a follower of BMG, used an impressive bass 760, 3300, he will be disappointed with the 860. By that I absolutely do not want to say that there is no bass ... which would be wrong too. But they are not as round, present and warmer than the 760. If you play with a clone, a small correction to the EQ does not hurt ...

But otherwise, if the engines are in good condition, it accelerates like a 760, it slows down the same way, in short ... it's a real plus for all the simulation found that anemic (too) often the workstations today (I'm not talking about Keyb, XK-3C ... there is another dimension). on the other hand, do not expect the same sound as 122, 147, 145 with tube amps. This applies to the 760 too ... and it is still a transistor amp that sounds differently than a tube amp, which has no such natural saturation, this heat very musical nor the drive.

In terms of reliability, it has already made a good fifty concerts, and is still in perfect condition. I use a Nord Stage Compact, which I found leslie simulation not terrible, even the basic sound is not terrible elsewhere on the North Stage ... But with the Leslie 860, the sound takes on a whole another dimension. One can even say that an organ will sound good cheap once you send its signal through a Leslie 860.

I bought in Canada for a very very decent ($ 500 with the Combo Preamp III), so for me the price / quality ratio is OK.

For the live, where the gear should be solid and easy to carry, this little Leslie is truly a dream for those who can not afford to finance a 3300. In the studio on the other hand, I priviégierais clearly a 122, 147 or 145.