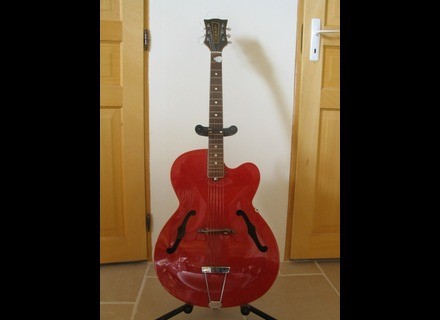 All user reviews for the Eko Jazz model M100

Average Score:4.5(4.5/5 based on 1 review)
Not satisfied with those reviews?
Our members also liked:

Eko Jazz model M100
4
Acoustic guitar for 70 years
the model is called exactly "EXPLORER" and not M100 (it is not the same)
made in Italy, at Recanati. Color "cherry red".
the violin is very high quality.
The handle is screwed onto the heel of the body (4 inserts) as an electric
At the time Eko was a mark "middle range" which never really break, it's a shame.
updated October 3, 2005:
thanks to the link's great that I received a afien Eko on a site full of useful information, the table, back and sides are maple. The neck is also maple with a rosewood fingerboard and adjustable truss-rod.Le bridge is rosewood.
The body is with pickguard.
It can be seen on the catalog of 1973 Eko http://www.fetishguitars.com/index/eko_index.html

The handle is a very fine electric, rosewood fingerboard. 21 boxes, 22 frets (there's one at the nut).
Access to acute is not great despite the cutaway because the palm of the hand touches the body which is quite deep (8cm).
The ergonomics are not bad for this kind of guitar, but the body is deeper than a hollow body, so after a while scratching it in the biceps!

In terms of sound is a bit feeble (I speak of the power in acoustics). It is quickly stifled by the folk at least two bullets.
The sound is very metallic, very jazzy. In short, it is not made to play a cowboy ballad arpeggios, his favorite is the gypsy to Sanseverino! And here is tiptop. I put the strings "Argentine" and I like it.
I want him sticking a microphone, but I do not know what to put?? I would tend to a humbucker seen that there is room between the strings and the table (no need to cut the box, fortunately).

I have for almost thirty years, and it is my great friend!
What I like most is its handle. It is amazing ease!
What I like least is its lack of power in acoustics.
I think she must be quite rare, because I have never seen other (mine is on the picture).
If another Afien has one, he does sign, we will try to make them do small ............