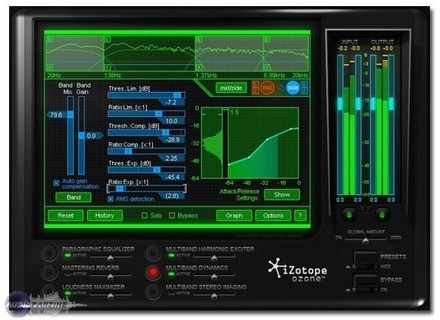 Ozone 4, Other effects bundle or multi-effect from iZotope in the Ozone series.

Product replaced by the iZotope Ozone 8.

View other reviews for this product:
Izotope makes good products and install isn't a mess. You are pretty much up and running in a few minutes. Just load up your daw, record and start. It comes ready to use no matter what your skill level. Ozone is really a mastering plugin for individual tracks or your entire mix. It comes with presets for all these applications. All the various effects are laid out sensibly. Ozone has a great many tools to utilize. You have the usual suspects of compressors and eq, but you also get a loudness maximizer and a dynamics processor. They even throw in a harmonic exciter.

I got this to use strictly for mix mastering. I did try it on individual tracks though. The presets, for the most part sound overdone. The use of the dynamics and the harmonics settings can be dangerous if you don't know what you're going. Tracks can get bloated very fast. To the untrained ear, it would appear that this is a great plugin but in reality most of the single track presets are really just overkill.
In a mix setting I liked it better, when used in moderation. Again, you have to take it easy with some of the more exotic functions. You can really choke out a good mix with this plugin if you aren't careful. Generally all I need is eq, compression, and some loudness maximization. The performance is decent. It isn't the lightest plug out there. I eventually got rid of it because I was only using it for one function and it didn't even do that very well. It was hogging cpu at that... I've since moved to using Waves plugs for mastering.

The presets are nice, especially for beginners. I would almost say this is a good learning all in one mastering plugin. After a while though, it starts to sound gimmicky on all but the most meager settings. But for the price, it's not a bad vst at all. If you take the time to learn it, you can get a lot of use. Don't expect it to "improve" your mixes by leaps and bounds. It's meant to be used as supplemental mastering. Not a sonic boob job. Still, I recommend it if you're on a budget.
Did you find this review helpful?yesno
Cookies help us improve performance, enhance user experience and deliver our services. By using our services, you agree to our use of cookies. Find out more.