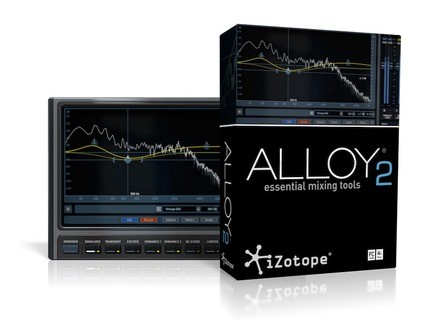 Alloy 2, Other effects bundle or multi-effect from iZotope.

All user reviews of 3/5 for the iZotope Alloy 2

Average Score:3.7( 3.7/5 based on 3 reviews )
Audience: Anyone Value For Money : Correct
Not satisfied with those reviews?
Our members also liked:

chabb's review (This content has been automatically translated from French)

with a 2.66 GHz Quad-core mac and 20GB SDRAM no problem processor.
do I start the session of PT 10 ave an occurrence thirty insert this plug in on audio tracks or Aux, and it works nickel.


This is a beautiful beast, I use since its release with satisfaction but you know something important for users to Protools.
(Maybe also for users of other apps, I do not know)

And by opening this project you will find that automation Alloy written in PT 10.3.6 is misinterpreted in PT 11.0.2

When I open the project in PT 11.0.2 (having installed the 64 bit AAX 2.02 Alloy) the automation of the filter curve is not the same as PT 10 and my original bell filter rule 200 Hz was transformed into a HP filter has a frequency of 6000 Hz with a slope of 48 dB / Oct, ie anything.
and the same goes for all the other parameters of Comp de-esser limiter etc ... their automation written in PT10 PT11 is misinterpreted in

The Alloy version 2.02 is supposed to work in both 32-bit under 10.3.6 PT PT 11 AND under 64 bits. They sell this update ensuring that compatibility is maintained between 10 and PT 11.
But this is not the case at all.
I contacted them again and again to find a solution, all they found were as response was to tell me to redo all my editions of EQ, compression, de-esser, etc ... in PT 11.
Izotope thank you, nice, I of every again.

I have sent my project their PT 10.3.6 and found by tests at home, yes there was a bug in version 2.02 but they had not planned new update yet .

Great, I more than to put me on the ear and repeat all the work.

Basically you should NOT do the update with the 2.02 version unless it starts a new project in PT 11.
Hence the automation works.

It is the transfer of a project to PT 10 PT 11 which interprets evil automation Alloy Version 2.02.

Faisez gaffe
Good job to all.

Primary defect in my opinion: the imposibilité to define or even a preset custom base that automatically open when the plug is placed in a housing insert. this is the default setting "factory" which is responsible, and must be manually go load the basic preset that you want demmarer work.
there are in the list of presets called a preset <Default> factory, but it can not impersonate.
Me it bothers me.