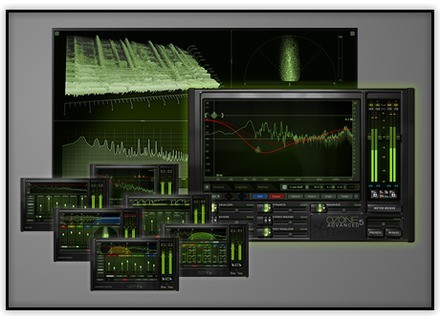 Ozone 5 Advanced, Other effects bundle or multi-effect from iZotope in the Ozone series.

vincent.loosfelt's review (This content has been automatically translated from French)" Izotop to top"

iZotope Ozone 5 Advanced
5
traditional installation, no problem qu'Izotope five recognized.
saw the qualities of the module, its installation weight, installation rapiditée use. everything is at the top.

Here is an important point.
for medium config (Quad-core 2.8 GHz / 4GB ram / ssd 1, Izotope react quite well. never crash, excellent stability.
we just met a lag time between the call of the module and its display.
force it can be a little irritating for fans of "I want everything immediately." force to switch between 10 different izotope, even on two screens that can be felt.

talk about performance: ASIO gets a little slap but it is affordable:
parcontre without a good sound card that supports the ASIO load, if you hit 15 maximizer IRC 3 (maximize smart) ... boom freeze it, cut it.
to use intelligently, prefer maximizer in "hard" mode or "soft" that charges less asio.

I tried SEVERAL Waves module biensur original ones Steinberg, and another trial version ... the purchase I returned to Izotop 5:

-Having a single module includes a Pre EQ and Post EQ is rather bienvu.
- Harmonic exiter is a true marvel (simulated tube preamp / diode / triode) if it is used with subtlety.
Maximize it is really effective that it can be greedy


I would not say it does wonders ... but almost.
well used in mastering, mix a little dish becomes close to a pro result
presets are useful, effective. but to use it fully you must have a basic understanding of the mix. because if you do not know what you want, Izotop can become a gasworks seen many adjustment possibilities and
(However well done!) Eg refine low frequencies (SUB) is not solely thanks to the EQ or multiband compressor, but also with stereo imaging ... that work also mutliband!!

I only mastering board

kralitoo's review (This content has been automatically translated from French)

iZotope Ozone 5 Advanced
5
No worries, it indicates the VST folder (64-bit version in this case) and that's worse ...

We used it all afternoon with a musician friend ... We had tried many kinds of bundles, such as wave arts, DDMF, Melda ... While the EQ DDMF are not bad, melda pack offers lots of interesting things and reverbs Wave Arts were nice ... But ultimately, we can do pretty much the same thing with the plugs included in the daw.

There is no comparison with what is proposed ozone, the settings are super intuitive with really usable presets ... And especially the sound! it makes a difference compared to 9 plugs in Logic Studio or Sonar X1!

Published on 10/08/14
iZotope announces the upcoming Ozone 6 mastering suite and lowers the price of Ozone 5 until the end of the month.

Listen to the 8 audio files about iZotope Ozone 5 Advanced »

Other iZotope other effects bundles or multi-effects