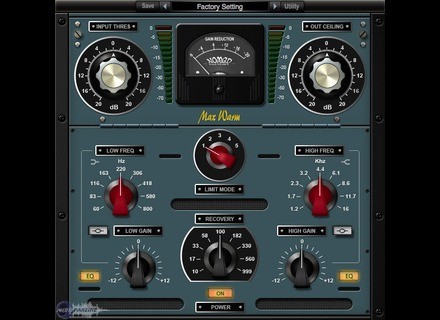 Nomad Factory Analog Mastering Tools
5
I had no problems with installing or using in protools,
and the plugins are real clear and easy to use so i didn't use the manual.

These plugins really give a warm sound to your music if used correctly and you can reach real hot levels in loudness with them.
I use them for hiphop, urban & pop productions.
Did you find this review helpful?yesno
»

Nomad Factory Analog Mastering Tools
4
Nomad Factory's Analog Mastering Tools is a plug-in bundle of three separate processors. As the name obviously states, these plug-ins are intended for mastering purposes and design themselves after analog gear. However, I've mostly used these plug-ins for mixing and they do the job just the same. The bundle is quite cheap, even if it just has three of them in there. The three plug-ins included in the bundle are the Max Warm, Multi Max, and Amp Leveling plug-ins. The Amp Leveling plug-in is a brick wall limiter, while Max Warm is both a limiter and EQ and Multi Max is an extended version of this. I wasn't the one to install this bundle on the systems at the studio where I work, so I can't speak up on this process at all. All of the plug-ins are fairly easy to use so I don't think users will be needing a manual for them.

We've got the Nomad Factory Analog Mastering Tools bundle running on all of our systems at the studio where I work. I've used them on most of the systems we have, but mostly in our A room which is Pro Tools HD based and has a Mac Pro computer that has 10 GB of RAM and dual 2.66 Ghz Intel Xeon processor. I've yet to have a problem with running any of the plug-ins on this system, but it's not the best judge since it's so powerful to begin with.

Nomad Factory's Analog Mastering Tools bundle is definitely one to look into if you're looking for a few extra mastering and mixing plug-ins. While they're supposed to be for mastering, and that's their best use, they're definitely suitable for mixing purposes as well and I've used them a good deal for that. These aren't professional mastering plug-ins and are really meant for the DAW user who wants to get some inexpensive mastering tools for home mastering jobs for demos and the like. I wouldn't master anything with this on a professional basis, as they just couldn't get the job done. Having said this, the bundle is very cheap and worth looking into if you're looking for some mastering plug-ins that can also serve as mixing tools as well.