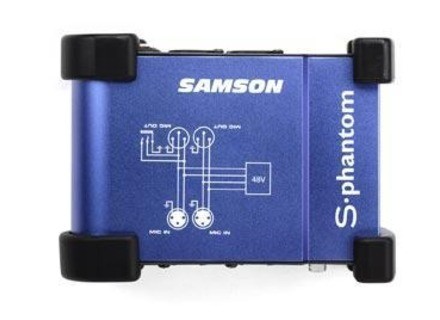 S-phantom, Other Misc. Product from Samson Technologies in the S Class Mini series.

View other reviews for this product:
The Samson Audio S-Phantom is a two channel phantom power box to use in the studio. Most people probably won't have a need for something like this, but if you have some mic preamps that don't have phantom power built in, as you'll sometimes find in older modules, then you'll need a phantom power box if you want to use condenser microphones with these preamps. It's also useful if you're on the go and want to use some condenser microphones. It's got a really simple make up, with two XLR inputs for each of the channels, and two XLR and 1/4" outputs for the corresponding inputs as well. There isn't anything else to the box other than that, as once you've plugged your condenser microphone(s) through it, you're all set to go. There are a number of different phantom power boxes out there, some with one channel, some with two, and some with four, but it seems like per channel, the Samson Audio S-Phantom is the best bang for your buck. It all really just depends on what you're using it for, as if you're in a larger professional recording studio, you might not want to be using something this cheap to give phantom power to your vintage microphones, although it should be totally fine. It does however, look a feel a bit cheap, but then again that's where they cut prices. If you have a studio of any type this is an easy way to save some money if you need a phantom power box, but I'd encourage you to check out the other phantom boxes out there to get a better idea of what's offered out there. That said, S-Phantom should do the job as good as any and will get the job done at a great price!
Did you find this review helpful?yesno
Cookies help us improve performance, enhance user experience and deliver our services. By using our services, you agree to our use of cookies. Find out more.