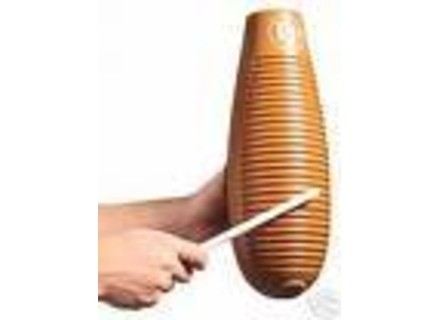 Lp SUPER GUIRO
5
The LP Super Guiro is a latin percussion instrument that is otherwise known as a scraper.  This version of the instrument comes with a sticker and the actually guiro itself.  I have used this instrument for recording on a number of occasions are I really like the sound that this can produce.  In general I really like the sound that this instrument can add to a mix, and LP's version is one of the best that I have used.  It has a crisp tone and cuts through a mix quite well if it is recorded properly.  I usually use a Shure SM57 for recording the LP Super Guiro placed about a foot or two away from it and that will get you an up close guiro sound that I very much enjoy.  Even though this instrument is primarily used in Latin music, I have had success using it in rock and pop as it can give a song a new feel and add something new to a mix.  When compared to other models of the guiro, the LP Super Guiro is as good as any of them out there in my opinion.  While I must confess that I probably have only used one or two other models of this instrument, I can't see how another would do all that much better as this really has a good sound.  Another great thing about the LP Super Guiro is that it has a very reasonable price tag and won't cost much for anyone to add to their percussion collective.  It works great in pretty much any situation that you would want to use it in including live shows and recording.  If you are looking for a nice sounding guiro that won't cost much at all, definitely check out the LP Super Guiro.

Other Lp other Non-Chromatic Percussion