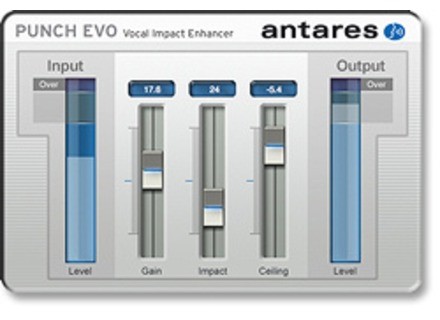 Antares Audio Technology Avox Punch Evo
4
Antares Systems Avox Punch Evo is a plug-in featured in the Avox Vocal Toolkit bundle of five plug-ins. It isn't available on its own, only in this bundle of plug-ins. The process of installing the plug-in was quick and easy, as there were no installation problems or other issues that I encountered. The interface is extremely easy to understand, as there are a limited number of parameters to play with including those for gain, impact, ceiling, and input and output levels. They call the plug-in a 'vocal' impact enhancer' but it is really just a dynamic processor. I don't think that you need a manual to install or figure out how to use it.

While I no longer have the system that I was running Antares Systems Avox Punch Evo on, it wasn't in Pro Tools. I had been running the plug-in in Cubase SX with a MOTU 896 HD audio interface, and without any problems at all. The plug-in really doesn't take up much processing power and also isn't the type of plug-in that I find using on anything and everything. It has a specific purpose for the most part, so it wasn't like I was using it on every track - really only on one or two vocal tracks if at all. I think that as long as you have a pretty decent system to run the plug-in with that you're currently able to run plug-ins on, that you'll be okay running Punch Evo, as well as the rest of the Avox bundle.

I've found the Antares Systems Avox Punch Evo to be a pretty useful plug-in since I first used it a number of years ago. It is definitely up there with the easiest plug-ins to use, and while it isn't the most versatile plug, it has a very solid sound. You can't buy this plug-in on its own, so if you're considering it I'd encourage you to check out the rest of the Avox bundle to see if it is worthwhile for you or not to pick up this plug-in and the rest of the Antares Systems Avox bundle.
Did you find this review helpful?yesno
»