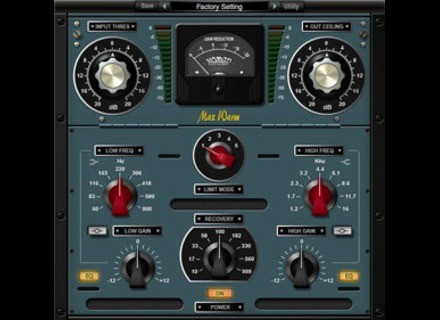 Nomad Factory A.M.T. Max Warm
4
I installed the Nomad Factory AMT Max Warm limiter with no problems. There were no compatibility issues that I had. The manual (a pdf that comes with download) was very informative. The setup was pretty basic and it's a really easy plug-in to figure out how to use. It can be used for mastering as well as mixing which makes it pretty flexible. It's not really a professional quality mastering plug-in but it'll work for home projects.

I've never had a problem with this software not working correctly. I haven't had to use it on a multitude of tracks really, so I don't know how opening multiple instances of it will affect the system, but I imagine that it would react similarly to most plug-ins would to that situation, which would be to slow down. It's been really stable with my Digi 003 rack overall. I've been getting a fast performance. I've been using it for a couple months now and I really like it.

The best thing about this limiter is the warmth it adds to a mix. I've basically been complaining that my mixes sounded dull and lifeless, and by adding this to certain elements of the mix I've managed to make it feel much better. I really like the extra low and high end EQ adjusters, which help balance out the frequencies after compression. This really helps the vocal feel more natural while still retaining the warmth that the plug-in provides. While this isn't what I always use I do like it more and more all the time, and am finding that I'll probably stick with it for awhile. I bought it in a bundle and all of the plug-ins in that bundle were totally worth it (price in interview reflects price of bundle as it's not sold seperately).

Nomad Factory A.M.T. Max Warm
4
The Nomad Factory A.M.T. Max Warm is a mastering plug-in that comes as part of the Analog Mastering Tools bundle of software from Nomad Factory. While all of the plug-ins in the bundle are specifically designed for mastering, they're definitely suitable for mixing as well. The bundle is available for Mac and PC systems and in VST, RTAS, and Audio Units plug-in formats. I didn't have anything to do with installing this plug-in and the bundle on the system at the studio where I work, so I can't speak to what that process is like. However, I will say that I haven't found the plug-in to be too hard to use. Essentially it's a limiter, an EQ, and a level maximizer all in one. The main parameters it has are for input threshold, output ceiling, limit mode, recovery (release), and two bands of equalization for high and low, each with their own semi-parametric frequency parameter and gain as well. As you can probably tell, it's not too complicated and most users should be able to get by without the help of a manual.

The studio that I work at has the Nomad Factory A.M.T. Max Warm plug-in and the full Analog Mastering Tools bundle running on a few different systems. The main room that we have has Pro Tools HD and a Mac Pro computer, which is the system I've used this plug-in primarily on. The computer consists of 10 GB of RAM and dual 2.66 Ghz Intel Xeon processors, while we've also got Apogee converters and a Neve 8068. Since it's a Pro Tools HD system, I've never had any problems at all running any plug-ins, including this one of course...

For the price per plug-in, the Nomad Factory A.M.T. bundle which includes the Max Warm plug-in is really a great deal. While they're definitely primarily best suited for mastering, I've found the bundle and this one in particular to be good for mixing as well. There's a good amount that you can do with Max Warm, but it's definitely best as a traditional limiter. It's certainly not the best sounding limiter out there in terms of plug-ins, but it will get the job done for demo projects at least for sure. The bundle as a whole is definitely something you should know about if you're in the market for some budget priced mastering/mixing plug-ins.