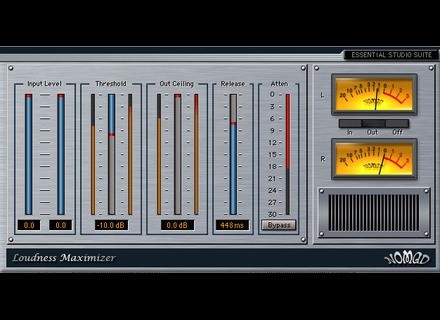 Nomad Factory Essential Loudness Maximizer
4
The Nomad Factory Essential Loudness Maximizer is a plug-in found in the Nomad Essential bundle of plug-ins. The bundle contains nine plug-in total, definitely living up to it’s name as an ‘Essential’ bundle, since it’s got all of your basic signal processors and then some. You install the bundle all at once, which shouldn’t be a problem at all as long as you’re installing the proper formats for your system. The configuration of the plug-in is easy to figure out and shouldn’t be a problem to use for anyone. The parameters it consists of include input level, threshold, output ceiling, and release. Even if you haven’t used many loudness maximizers out there like those made famous by Waves, it shouldn’t take too long to feel comfortable using it. For this reason I don’t believe that a manual is necessary.

The system that I’m running this plug-in on is Pro Tools LE 8 based. I’m running it on a Mac Book Pro that has a 2.2 Ghz Intel Core 2 Duo processor and 4 GB of RAM, while I’m running Pro Tools LE 8 with a Digi 002R audio interface. Judging solely from running it on this system I’d say that most people will be okay using it. This bundle in general doesn’t seem to take up too much processing power, but since I’ve only been running it on one system, it’s hard to say how well it might run on a lesser system.

While not my favorite loudness maximizer to use, in most situations it will be more than suitable. It’s definitely possible to get your master louder by a few db’s. but I don’t find that it’s as clean and true sounding as that made by Waves, like the L2 or L3 maximizers which have more or less been the industry standard for this sort of thing. It’s more than nice to get this plug-in in the Essential bundle, but I wouldn’t recommend the bundle solely for this one. However, if you like the others in the bundle as well, it’s cheap enough where it’s definitely worth it to scoop up the full bundle.