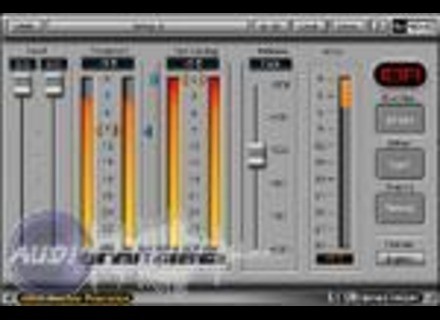 Waves L1 Ultramaximizer
3
Waves L1 is a software effects plug-in to be used in a DAW. All Waves plug-ins can be installed by downloading them off the Waves website. Authorization is completed using a USB stick as a dongle, or using an authorization manager application if your computer connects to the internet.
Waves plug-ins are know for being stable, and rarely have any bugs. The 'L1' plug-in has been around a long time and has been tried and tested in all popular DAWs.

The L1 limiter is easy to use. There is 'threshold' slider to adjust how much limiting is occurring. There is an 'output ceiling' slider if you want the signal to be limiter at a particular amplitude level. If you are using a limiter as the final plug-in on your mix bus, I definitely recommend setting the output ceiling to -0.3 or -0.5. The main reason to do this is to prevent inter-sample peaks. Digital limiting prevents the digital samples of a signal from exceeding a particular amplitude. However, when the digital signal is converter to analog, it is possible that the digital samples do not occur at the true 'peaks' of your signal. Because of this, the digital to analog converter will 'clip'. If you set your output ceiling to be less than 0.0, then the inter-sample clipping can be prevented.
I received the L1 plug-in because I purchased the 'Gold' bundle from Waves. I have several other limiters (Maxim, FG-X, MaxxVolume, etc.). The 'L1' is definitely not my 'go-to' limiter on my mix bus. The 'L1' has been around a long time, and digital limiting techniques have significantly advanced since it was released. At this time, I would definitely recommend checking out some never digital limiters (L2, L3) if you are specifically looking to get a mix bus limiter.

Digital limiting with a plug-in has a unique feature - 'look ahead' limiting. This means that the processor knows what it is going to 'limit' prior to having to process it. The 'L1' limiter was one of the first plug-ins to utilize this kind of processing. I don't recommend using the 'L1' for heavy compression. I notice that this plug-in doesn't sound very good when I have to really squash a signal. If you are going to use the 'L1', I would recommend only using it subtly.
The 'L1' can also be used for dithering a signal. This is a necessary processing step if you have recorded a signal at a bit rate (like 24 bits) but your mix down needs to be a different bit rate (16 bits).

Waves L1 Ultramaximizer
3
There were no compatibility or installation issues getting Waves' L1 Ultramaximizer up and running. Although outdated today, the L1 was the original adaptive limiter released by Waves and is certainly an effective way of boosting your signal without blowing up/distorting the mix. The display is fairly simple and the parameters (input, output ceiling, threshold, release, etc.) are largely self-explanatory. Although I have never required its assistance, I'm sure the manual for the L1, as with all of the other Waves plug-ins I have used, is well indexed and helpful.

Running in Ableton Live 8 on my MacBook Pro with a 2.7Ghz Intel Core i7 processor and 4GBs of RAM, Waves' L1 Ultramaximizer is as smooth as clockwork, but worry not Windows users as this plug-in is cross compatible. Being fairly light with regards to overall CPU usage, it is stable and reliable even in situations where many other effects and VSTs are operating simultaneously. As far as performance is concerned, I just through the L1 on either an individual track, my sends, or my master, and set the parameters to boost the mix without clipping. I've had the L1 Ultramaximizer for almost four months now and although it has been far surpassed by the L2, L3, MaxxVolume et. al, I certainly don't regret my purchase.

Overall you can definitely pick up something in the Waves series that is a much better plug-in for loudness, but you will be hard pressed to find something more classic. Though limited compared to today's standards, I still use the L1 as a temporary device if I need a brick-wall limiter to keep a production in the works from clipping before it is mastered. My recommendation is to get something more recent, but if you are a true aficionado, you can pick the L1 up in its Native version, or in the Mercury bundle deal. Although I wouldn't endorse it, the Native version which was originally $150, it is now on sale for $64 on the Waves website. Not that bad deal I guess, but probably still more bang for your buck if you get the Mercury bundle deal and upgrade to something much better. Then at least you have it if you wanna try it.
Did you find this review helpful?yesno
»

Waves L1 Ultramaximizer
5
The Waves L1 Ultramaximizer is the first of it's kind in being a look ahead peak limiting software plug-in. The plug-in is still available to buy, but it's probably not as good as it's followers in the L2 and L3. I installed it along with other Waves plug-ins, which is an easy process and shouldn't be much different than installing any other software. Using the L1 is a very simple process as it doesn't have too much going on, although it does have more than the simple L2 Ultramaximizer. That said, it still just has sliders to control your input level, threshold, out ceiling, and release. It also has dither, shaping, and quantize options. That's all there is to the L1, and if you have used the L2 or L3 before, you'll feel right at home here. A manual shouldn't be necessary, but ya never know.

I've got the Waves L1 Ultramaximizer running on my system at home, which is Pro Tools 9 based. I've got a Mac Book Pro that has a 2.2 Ghz Intel Core 2 Duo processor and 4 GB of RAM and run Pro Tools 9 with a Digi 002R audio interface. This has been enough for me to run a lot of RTAS plug-ins without issues, and in the case of the L1, I've only used it on the master buss anyway so it hasn't caused any problems for me...

Even though it's the first of it's kind from Waves, and has since been surpassed, the Waves L1 Ultramaximizer is a great limiting plug-in. I don't know if it's cheaper to buy this one individually when compared to the L2 or L3, but if it's not I'd definitely recommend going with the L3 Multimaximizer since there's more control and it does the same thing. Still, the L1 is a great plug-in and if you've already got it and haven't been using it, I'd suggest throwing it up on your master buss to check it out. You can certainly get your mixes louder with this, and even though it's the original Ultramaximizer, it still sounds great and brings a lot to the table.

Waves L1 Ultramaximizer
4
Waves has long since been one of the leaders when it comes to making very useful plugins. This plugin was one of the original loudness plugins in the Waves world, and it's been used on tons of mixes. While it's a bit dated today, it's still one of my go-to plugins for helping maximize loudness while retaining a safe barrier that doesn't distort the overall mix. Basically, this is a limiter plugin. In Logic Pro, they're called an adaptive limiter, and this has the same look-ahead feature that Logic's has. You have sliders for input, output ceiling, threshold, release, and different buttons for other things such as bit depth, dither, shaping and analog/digital. To use this, simply enable it on your master buss. You can use it on other busses as well, but it's usually used on the master buss. If you've used a limiter before, it should be very easy to use. If not, just keep the output ceiling below 0.0 and mess with the settings until you find something that sounds good. There's no need for a manual.

Waves is great with both performance and stability. They are awesome when it comes to stability. I've never experienced a direct crash related towards utilizing this plugin inside any of my projects. The plugin itself doesn't take up too much RAM or processing power, either. While this is usually used on the final master buss, it's important to keep the RAM and processing usage as low as possible. The plugin is also cross platform compatible, so it'll work with nearly any computer out there. There is one issue, however. This is a 32 bit plugin. In a 64 bit world, that means you need to utilize a special bridge application to use this. On top of that, it's somewhat limited compared to the other plugins that are used for loudness.

The plugin is definitely showing its age, especially considering that other DAWs have their own adaptive limiter with a look-ahead function. I've used this plugin with success in the past, and it's still one of my go-to plugins if I'm not using the standard Logic plugins. That said, it lacks the options the other ones have, and that can be a bit of a deal breaker for some.

Published on 10/16/15
This Saturday, Waves offers special sales on two plugins and one bundle.