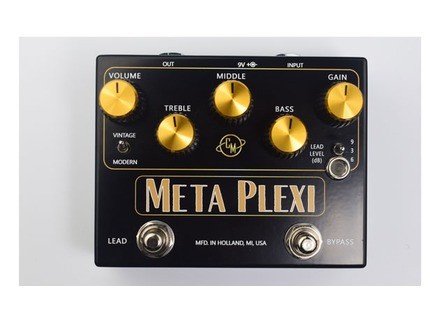 All user reviews for the Cusack Music Meta Plexi

Cusack Music Meta Plexi
5
SOUND:
I’ve worked with a number of Plexi-based pedals and find the Meta Plexi to have the best sound and the greatest diversity when working with various amps (including pushing the Gain on the pedal with a clean amp or adding a bit of Gain to an already dirty amp). I used the Meta Plexi with two clean channels, which I’ll address first: the Amp1 Iridium (by BluGuitar) and The Countess V4 (by Victory Amps). The Iridium had more of a bite (since it’s a solid state with nanotube technology), whereas The Countess was warmer (since it’s a 4-tube preamp). In both instances the Plexi flavor was strong and sounded great. As well, even with the Gain all the way down there is a nice grainy crunch effect, ideal for soft to moderate Rock. For rhythm, I find the Gain can range from all the way down to about 12-noon (now entering Hard Rock and Hi-Gain territory). Once past 12-noon the ‘heaviness’ and saturation picks up so that it seems more appropriate for lead, unless you like that thick wooly sound. When working with gain channels, a very little goes a long way (Meta Plexi’s Gain either all the way down or up quarter-way at most). I applied this to the various gain channels on the Iridium (a Metal amp), as well as three Victory preamps: The Sheriff (a Plexi-based sound), The Countess (warm, thick hi-gain) and The Kraken (edgy hi-gain). The Meta Plexi, in all instances, added that overdriven bite exceptionally well, able to work with multiple platforms. The Meta Plexi also has two modes: Vintage and Modern. The Vintage has more ‘headroom,’ dynamics and note nuances, whereas the Modern sounds creamier and smooth (with a touch of mid scoop in comparison). The EQ is quite varied, in that a touch of Treble, Bass or Midrange makes a difference and certainly proves useful in crafting a host of various tones. When engaging the Lead switch you have the option of Boosting the signal by 3dB, 6dB and 9dB – obviously 3dB is subtle, yet audible, whereas 9dB is far more obvious in the mix.

GENERAL USE:
The Meta Plexi engages and disengages via the Bypass Switch. When Lead is not selected the LED is off when the pedal is bypassed, but Red when engaged. When Lead is selected and the pedal is on the LED is yellow, but is green when bypassed (to also indicate that when you turn it on it will be in boost mode, rather than finding out unexpectedly when you hit the bypass switch to turn it on). Consequently, there is a modest learning curve to know when the pedal is on or off based on whether the Lead function is engaged or not. The Volume and Gain controls work together, in that more Gain may require a reduction in Volume and vice versa. On a clean channel the Gain will range from grainy and crunchy when turned all the way down to thick and saturated when turned up and beyond 12-noon. The EQ works as usual, with Bass, Midrange and Treble controls, all of which are touch sensitive enough so that a tweak from any of them can make a difference in sound (the Meta Plexi works exceptionally well for those who like to scoop the Mids or produce any other type of tone nuance).


When engaging the Lead function, there also is a Boost control that enables you to bump up the volume by 3dB, 6dB and 9dB. I find a modest 3dB enough, but that would depend on other guitarists in a group and how much push the Lead requires. It’s nice to have options, which the Meta Plexi delivers. Finally, there is a Vintage and Modern setting. Vintage has more dynamics and note definition in the mix (more headroom as well), whereas the Modern setting has a more even saturated tone, along with a touch of Mid scoop. I like the Vintage setting when combined with a clean amp, whereas the Modern setting definitely is required when adding the Meta Plexi (as an OD) to an already driven amp.

OTHER DETAILS:
The Meta Plexi measures 90mm(D) × 115mm (W) × 50mm (H) or 3.54 (D) x 4.53 (W) x 1.97 (H) inches. A solid built pedal, it has a black aluminum chassis and gold/white screen graphics. There are two ‘soft’ footswitches (Lead and Bypass), neither of which produces any audible sound when engaged or disengaged. The two toggle switches (for mode and dB level) are solid and easy enough to flip into place. The five plastic knobs, reminiscent of a Marshall amp, are of good quality and the pots feel smooth and solid when turned. The modulation type pushbutton switch also feels solid and engages the intended effect (chorus or vibrato) without any issues. The footswitches are far enough removed from the LED, toggle switches and knobs that damage from use should be avoided. The input, output and power insert all are located in the back, thereby saving some pedalboard space while keeping cables further from a stomping foot. The Meta Plexi requires a 9VDC standard power supply (negative tip) while drawing less than 20mA of current.

OVERALL IMPRESSION:
This pedal sounds and looks great. Not many could argue gold hardware and writing on black and the sound is authentic to the Plexi heritage. Not only do you get that unmistaken Plexi grain and bite, but you can have it with a Vintage (dynamic) or Modern flare (tight) and with a Lead function that boosts the signal just enough and to your liking. The Meta Plexi sounds awesome with a clean channel, turning any clean amp into a Marshall beast, but works exceptionally well as an overdrive with already driven amps (from low-gain to hi-gain and everything between). I’ve worked with various Plexi-based pedals and had my favorites, but the Meta Plexi has taken the number one spot and for several reasons – it reproduces the Plexi qualities faithfully, it offers a wide array of tone possibilities and it works with anything from ultra-clean to hi-gain nasty. There are no apparent limitations, unless you are looking for a low-gain OD type pedal. Even with the Meta Plexi’s Gain all the way down, there is enough drive for moderate Rock music. If that is too harsh, you would need to adjust your guitar’s volume, as well as your clean amp’s gain.