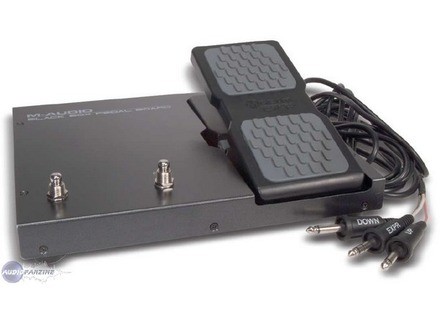 jeff b's review (This content has been automatically translated from French)

M-Audio Black Box Pedal Board
4
I use the black box for over a year.
What I like most about the black box is the relationship between price, quality (sound and latency) and all the possibilities offered by the machine.
Can play an album zapping each other to practice, you can play with headphones and enjoy all the freewares available on the internet (mp3 players, such as multi-reaper, bestpractice, mtronomes etc.).
Obviously, it is not really to live, especially when Whereas the time change of sound but it's really a matter of usage.
Jou pod before I was on, and on an old pandora Px3 but they did not offer many possibilities.
I would do this choice without difficulty because of its versatility and use that I have but does not take much in terms of other uses ...
Without the problem of SAV (6 weeks minimum for a breakdown), I put 10.
Did you find this review helpful?yesno
»

Reiep's review (This content has been automatically translated from French)

M-Audio Black Box Pedal Board
4
I use this pedal since January 2007, together with a Black Box Because buying pack.

The chassis is made of metal (presumably iron), it is rather solid, very heavy and stable with large rubber feet. Switches metal too good.

on the other hand I am much more circumspect about the expression pedal for real cheap plastic, it is therefore better to have to handle it smoothly. I have only used very rarely (mostly volume pedal), and that's fine like that. To use a wah is suicidal in the medium term.

Level connectivity, a large cable out of the box for fun in three jacks.

Finally, consider this as two pedal switches and pedal to occasional use. In view of its use in a purchase alone, but bundled with a Black Box is not bad.

So rating: 10 for part chassis + switch really well - 3 for the pedal.

Used temporarily with an Axe FX, which has a function to cut an effect when the pedal is 0 (like wah), the expression pedal is used. As against the cables are too short! As a note only changes by one point.
Did you find this review helpful?yesno
»

Aquabluesman's review (This content has been automatically translated from French)

M-Audio Black Box Pedal Board
5
I have now for 6 months RELOADED version and have a blast on it daily. Which is great, in addition to the quality of the presets, all the effects available from all possible rélages is that it allowed me to register with its high quality live on my computer! I have recorded guitar, bass, drums and vocals! The quality of the models was alluscinant! the only downside is that it took 1-1 record, but good for that price I do not want him too.
Otherwise the pedal is fully adjustable, the only problem (for which I did put that 9) is that it is a bit poor in terms of buttons: 2 switch and a volume ...
Otherwise it is a bit complicated all the settings at first but if you keep the manual next to or during the first few months quickly found its mark.
On stage it does not replace a good pedal or a good set of pedals, but few come and bring a more complete and (notably for all type effects adrenaline)
I ressigne for this little black box without hesitation
Did you find this review helpful?yesno
»

See all 14 photos of M-Audio Black Box Pedal Board »