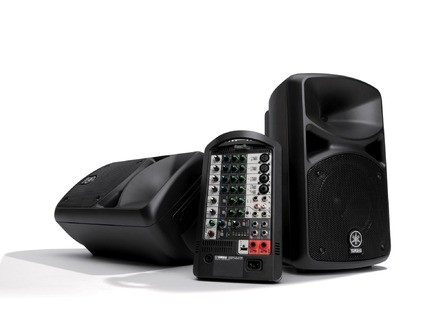 Stagepas 400i, Portable PA Speaker Cabinet from Yamaha in the Stagepas series.

View other reviews for this product:
On paper, 400 watts into 4 ohms! It's obviously "dynamic." An exotic output power. In fact, it's rated at 125 watts before clipping (with 1% THD, 1khz @ 1W) per channel into the same impedance (percentage of the 3rd harmonic with respect to the root note). Nominal, it's no more than 37 watts! The power divided by 5, two times 40 watts RMS!!! In practice, you will never have more than 50 watts per channel. Enough for a musician to do a small hall, especially if you connect all your instruments to the small mixer.
The mic inputs are very faithful for vocals, especially with dynamic mics. As a PA system with around 100 people in the audience (applying a 1 watt/1meter per person rule), it's a reasonable choice that won't hurt your budget. The Stagepass 400I is rated at 125 db SPL, but in the manual there's not a single word about the speakers, which is 8" big and seems quite stiff, so you will need to break it in to get the best of it. The Bass Reflex speakers almost don't vibrate at all and have a good diffraction.
The StagePas 400I is IPOD and IPhone compatible, according to the manual. But not only. First generation IPADs are also welcome. And even more so the later versions. The Stagepass 400I plays the audio and recharges the iPAD! MP3s obviously. A good EQ is needed for pre-mixing. A limiter and an EQ per band will do the job. To get better results you can use an external CD player. You should preferably listen to the mix using the monitor's mono output to avoid phase shifts. A drawback is that it has no stereo headphone connector for the controls. The simple addition of a powered sub of at least 120 watts RMS will give this system the power it lacks in the bottom end.
In conclusion, the Yamaha StagePas 400I is not exceptional on paper, in terms of power characteristics, for a low-end PA system. On the other hand, its overall quality is all right. And its durability is a bonus.
Did you find this review helpful?yesno
Cookies help us improve performance, enhance user experience and deliver our services. By using our services, you agree to our use of cookies. Find out more.