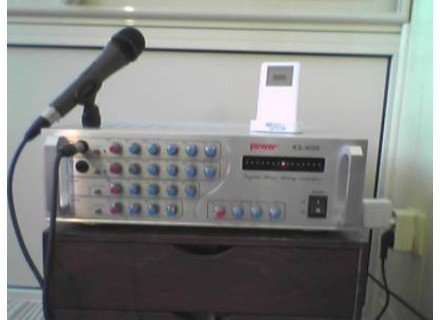 Elemiah666's review (This content has been automatically translated from French)

Power Acoustics KS-9090
5
This is a karaoke amplifier 2x100W rms (mixer amplifier with digital effects)
-2 Mic in facade, each with a 3 band eq, volume, balance, an effect level and limiter gain of between-20db with clip indicator (red LED)
A-chos rglage affecting 2 between facade with a volume, a 2-band eq, SETTING THE one time, a frequency drives rglage of things and a mono selector str o,
2 between the rear panel (A and B) with a facade in one volume, a 3-band eq and an A / B
-Master output on front panel with volume, balance and 2-band eq
Rear-facing one has a record output, an output line and output grade, an effects loop and two tickets to. (While RCA)
-Connectors: two power outputs (right and left) 2 dnud balance XLR outputs and an output jack in grade.

I use it for almost a year, I used to connect a microphone and guitar front, or sound to the evening.

What I like most is the quality of the digital effects, the rglages cover a wide range and are very effective, the sound is warm. the front is trs treats with brushed aluminum finish of the most beautiful effect. It is rack (the Querre are dmontables)
As against the bte is heavy! It weighs more than 10kg, but it proves that he has good transformers.
The only footwear that is regrettable is the lack of fan, it warms a bit, but if you do not break above there is no problem (the vcuation is from above).

The report price is exeptional quality, I got a 150 instead of 300, 300 and some mixers are amplified the effects of this quality. More power does not lie ad!

With the experience I remake that choice without hsitations. I put 10/10 as I think it's worth.
Did you find this review helpful?yesno
»