This week I will reveal to you some very simple tricks that ought to allow you to get a guitar sound that is more "lively" or "produced," for lack of a better word.

As you will see, all of these techniques rely on the double-tracking principle mentioned in an earlier article, but this time the idea is to do some fine-tuning…

The first trick is the most obvious one: to double a crunch or heavily distorted guitar with a clean one. By sub-mixing a clean sound, you will be able to retain some precision, which is no minor detail considering that distortion has the annoying tendency of blurring sound. For this trick to be as transparent as possible, the crunch and clean performances must be as similar as can be. That being said, if you have a hard time getting that perfection, you can always "cheat": be it by editing the clean sound to make it match the original performance or simply doing some reamping with the first take, as discussed previously. In both cases the trick ought to work wonders because the clean take is only meant to be "felt" but not distinctively heard by the listener. 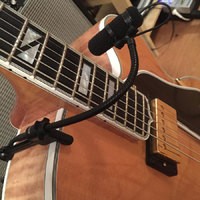 Although much less common, the second trick I have in store for you shouldn't be taken lightly. The idea is to double a more or less distorted guitar part with an acoustic recording of the strings of your electric guitar recorded simultaneously as the distorted part. As preposterous as it sounds at first, considering that the sound of an electric guitar without an amp is certainly not the most pleasant one, the overall result can be truly amazing! Indeed, well managed, this screeching sound has the particularity of adding a bit more dynamic relief to "trashy" sounds, providing the performance a more "organic" aspect, especially due to the accents produced by the pick. But just like with the first trick, you need to sub-mix this take wisely so that the listener doesn't end up discovering the trick.

Here is some advice to record such takes:

The third technique I would like to talk about today consists in, once again, doubling a distorted, or not, guitar sound with a...folk guitar. This will give you much more definition and sustain on arpeggios, while on rhythm guitars it will allow you to highlight the sound's percussive aspect, and on power chords it will make your sound more powerful. This production technique has been around for ages (Led Zeppelin was pretty fond of it, for instance). But this doesn't mean that it's an outdated trick and it can't be used on modern productions: lots of contemporary metal bands still use it nowadays.

To finish, here's one damn good last trick: doubling an electric guitar with... anything else. I know that's pretty vague but I must say that I had a hard time putting it any other way. The goal is to listen to your guitar sound and analyze it to find out what it lacks. Then you "only" need to find a sound that can fill this "hole." For instance, a friend of mine once told me he doubled a crunchy guitar sound with a sample of a lightbulb being rubbed on his boot with the goal of emphasizing the strumming sensation. Much less arcane, there's the famous example of the particularly "fat" riff on Radiohead's Airbag. If you listen to the intro, you can hear that the riff is being doubled with a cello, which obviously adds a lot of the breadth to the sound, as I'm sure you'll agree. I would love to keep on giving you more ideas in this regard, but the scope of this method is so wide and open that the only thing I can tell you is to let your imagination fly, experiment and have fun!