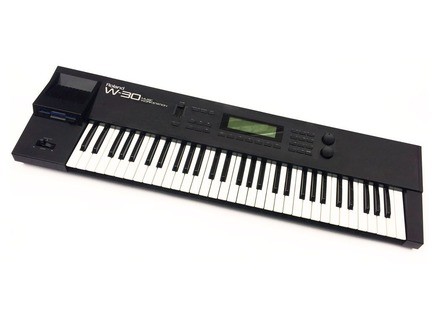 View other reviews for this product:
Sampler sequencer released in late 80s. I bought it used in 1994.
Keyboard with 61 velocity and tocuhes aftertouche if I remember correctly.
16 voice polyphony.
No internal sounds: everything is stored on disk 1 .44 MB So we better sample and we met. But I think you could put only 16 sounds per disk.
Sequencer
No effect except a filter internally.
The rear of the machine is a real little cheese. XLR outputs, 8 outputs, taken 3 midi in / out / thru

The configuration is not easy especially if one starts, and it was my case. So the manual shook your best friend to understand the philosophy of the machine and the system of menus and sub-menus.
After some time past, the use becomes more clear and easy. One sample, we edit, we assign to the bank and sound playing in sequence.
The edition is the base / cut, paste, 12dB resonant filter.
As the sequencer, it is type MC with a laborious but clear edition as a whole: a line = a note, its velocity, its position, its pan.

While there, ca sends. Incredible dynamics. We are dealing with sounds dated but effective and straight forward. Would that sounds EP have the potato, the bass is slamming. The sound of the instrument will depend on what you samplerez and filter change you all very efficiently.

The W30 has been mine for four years. It was my first pro hardware and how hard. A real tank, super heavy and sturdy with a look to flee aficionados Emulators.
But it is a machine that had its charm and held quite a candle to others (eg akai ...). She was very professional and open to the outside by its connections.
The W30 has opened me to finally sampling so playful with a sense of freedom and enormous creativity.
Now the comparison with today's gear is not more to evolution is so important. The current material gives you everything but the W30 forces you to work and think about how you compose or create. But if you want a sampler keyboard character for some live sounds, this is for you Roland.
See the source
Did you find this review helpful?yesno
Cookies help us improve performance, enhance user experience and deliver our services. By using our services, you agree to our use of cookies. Find out more.