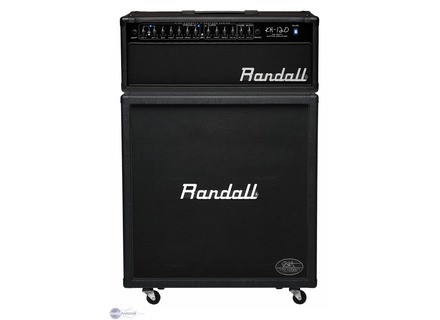 All user reviews of 4/5 for the Randall KH120RHS

First of all, I hesitated a long time before writing this review. Why? Because I read everywhere "solid state is bullshit, you're not a man if you don't use tubes"... My response to that would be "perhaps not"... It's only a question of what you are expecting and how much money you have. Indeed if we all had big salaries we would most probably buy a Mesa Dual Rectifier or Diezel amp.

Having said that, I'll concentrate now on this 100-watt solid-state amplifier head and its 4x12" speaker cabinet (only sold together).

The clean sound is not bad and when you play loud enough with an adequate EQ setting it can also produce slightly overdriven sounds. Yes, you get a light crunch sound.

It's a pity but both distortions are identical: same EQ, same volume, same presence. However, using the gain control you can achieve settings that produce very powerful sounds.

The EQs on both channels are very effective and allow you to create richer sounds.

Presence: not bad but it could (always) be better!

The master volume control is very effective (in my apartment I don't turn it beyond 2.5) and the reverb effect is ok.

[edit] Update about the footswitch: Contrary to what I had written before, it does allow you to switch between channels but it wasn't very clear to me in the beginning. The rear panel has two connectors labeled "OD1/OD2" and "Channel Reverb". I thought the second channel only allowed you to switch the reverb effect on/off (as its name implies). I was wrong. Plugging the footswitch into this connector gives you the possibility to control the reverb and to toggle between the clean and OD channel you previously selected. You can connect an additional single footswitch to the OD1/OD2 connector to toggle between both OD types (distortion channels). The manual doesn't have any information about this and I had to send an email to Randall to get an explanation. I'm not a beginner in the amp world but in this case I believe it wasn't very clear!
The amp head has connectors for a 4 or 8-Ohm speaker. Ground Lift switch.
FX loop (not yet tested), external input for playback sources like a MP3/CD player (not yet tested).

The speaker cabinet is well manufactured and it is equipped with 12" Celestion Rocket 50s. I know they are not he best, but for this price you can't expect Celestion's top-range products. Nevertheless the sound is clear and they make a good impression. And with 200 watts you've got more than enough power.

Some of you have compared it to a Laney in the same range. I tested it recently and found the KH-120 sounds definitely better, but it's all a matter of taste. FYI I'm playing with EMG 81/85, 81/81 and EMG-HZ active pickups and they give me a wide palette of sounds. I'm currently on the quest for a tube distortion (Blackstar), a MXR EQ and an ISP noise gate to get a more powerful sound and to warm up my transistors. A comprehensive set of effect pedals is good for those who don't want to get a multi-FX processor but still want to get a good sound either with headphones (yes this feature is rare on all-tube amps but it's very useful) or a speaker for rehearsals with a band.

I recommend all skeptics to test this amp... And I would be more than happy to receive anyone from Audiofanzine at my place (Denfert, Mazal) so that they can test the amp and I can get the opinion of a pro.

For the money I paid it's very good and I think this Randall amp is a great tool to practice and have fun.


View price information
Did you find this review helpful?yesno
Cookies help us improve performance, enhance user experience and deliver our services. By using our services, you agree to our use of cookies. Find out more.