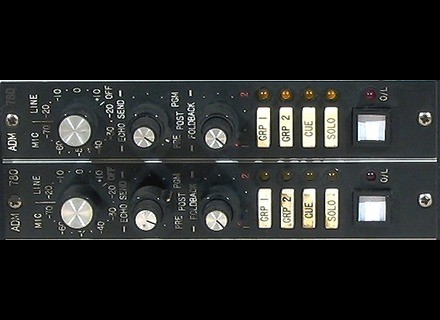 Adm 780
5
The ADM 780 is a microphone preamplifier that is originally found in a console, the exact origin of which I'm not sure of. It is definitely from a console though because it has some features that you wouldn't see in a piece of outboard gear and that are useless outside of the console. I have only used the 780 as an outboard preamp and have never seen it in a console myself however. I don't know what types of connections it has since it was already racked. It was enclosed in some sort of casing, but I'm really not sure what. It wasn't rack mountable in a traditional sense though.

The make up of the ADM 780 isn't generally too hard to figure out, however you do have to weed through the parameters that will not apply when the 780 is outside of the console. It's got a knob for gain as well as knobs and buttons for sends and other features that would really only be useful in a console. I guess you could still use it fully, but it would have to be hooked up properly, which most likely isn't easy. The ones that I used only had the gain knob in use, which is all you really need anyway. A manual isn't necessary, and they probably don't have one anyway.

The ADM 780 is overall a very sweet sounding mic pre. I've used it for recording tom tom drums as well as a room microphone for an electric guitar. They can be used for pretty much any purpose since they came from a console and are wired to be versatile, and they definitely have the sound to match it. I haven't had the most experience with these mic pres yet, so I can't recommend too many other applications, but if you have one I would highly recommend trying them on just about everything possible to see how they fair best in your space.

I've been working a bit in a studio that has about four or five ADM 780s, so I'm excited to continue to work with them and to see what they can do further. It is clear from just using them a few times that they are special sound microphone preamps that are worthy of use in high end studios. I don't know too much about the background of these, but I do know that they have a killer sound. Definitely worthy of use within any studio that you might see them in.
Did you find this review helpful?yesno
»