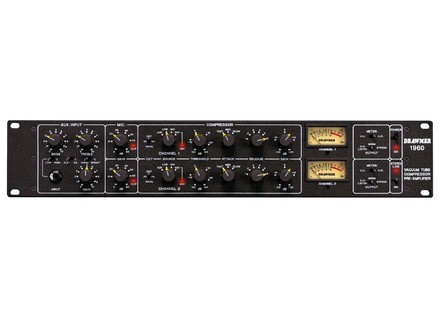 Drawmer 1960
5
The Drawmer 1960 is a stereo vacuum tube based preamplifier and compressor. It is made up of analog components and aims to blend the sound of old and new. Each of the two channels has both XLR mic and line inputs as well as a single XLR output for each as well. It then has 1/4" connections for audio patch and side chain inserts. IT also has a 1/4" input in the front under the auxiliary input section. It is in rackable form and will take up two spaces in total.

The configuration of the Drawmer 1960 has a good amount going on, as there is a lot of control over your sound with this. However, nothing is too out of the ordinary, so if you're familiar with preamps and compressors you will definitely feel at ease here. Each channel has a few different sections to work with for your preamp, the compressor, and your auxiliary input. The aux input section contains parameters for bass, treble, and gain, as well as switches to switch on the EQ, a normal/bright setting, and for choosing either a high or low impedance for the input. There are then two knobs for gain under the microphone section, and parameters for source, threshold, attack, release, and gain under the compression header. Each channel also has it's own meter with options for viewing either gain reduction or output level. A manual isn't necessary I don't think, but I haven't seen one so I can't comment on it's make up.

The sound of the Drawmer 1960 is absolutely top notch. I've used it primarily on lead vocals, but also used the compressor on snare drum and the mic preamps electric and acoustic guitar. In general the 1960 is versatile, so I believe it would be able to adapt to just about any application that you wanted to use with it. This is the benefit of having so many features and options, as it allows you to shape your sound to be suitable for all sorts of situations. The sound of the Drawmer 1960 in general can be described as creamy, warm, and quite vibrant. I'm a big fan of both the preamps and the compressors, as they both have a similar sort of quality to them. It is generally hard to describe the sound of something in words, so if you're really interested I'd highly recommend checking it out for yourself.

The Drawmer 1960 is a stellar choice for a high end stereo microphone preamplifier and compressor. It has pretty much everything that you'd look for in such an item, and getting two channels for the price is a really great thing. Honestly, I could see something like the Drawmer 1960 being this much money for a single channel. While still most likely out of the price range for your average home studio owner, this would be the perfect investment for a home studio owner looking to take their recordings to another level as this is definitely a professional piece of gear worth knowing about.

Drawmer 1960
5
Double pre-amp compressor any lamp. In between with a faade Instrument To baptize equipped with a legalization Hight & Low.
___2 Pairs of XLR Sym. 1 Mic and 1 line
___Les Insert (I / O) by Jack sym.

All in 2U 19 "all black, black button, switch Metal, VU meters are needles. In short a tank finally sober and discreet studio class discrte ...

The machine is clear trs. If a musician is back. The nitre has seen two positions:
__Gain Of.
__Reduction Gain by the compressor .*

Compression comes dbrayable the help of another switch:
__Norm Output level with the compressor
__Out "" "" Only the Pramp
Listen __SC "" "The insert.

APRS is good because of its gain without the compressor. Then activates or not Bouzin.
The must know a little music. The compressor is usual rglages Tresher, attack and release a 4-position (fail) and level.
This compression is terrible that simple rglage must spend time in a cost. Jolie still sound coming out of this machine is standard. But little Savre APRS blow in an unusable mix. a dribble by pushing earnings. The only pramp pose no problem and it is beautiful! Bandwidth wider than a highway. I have cable above the Flamingo Junoir (Violet Design) of NT2A Rode, A Se 2200T, My C012 Oktava, my Shure PG 56 and 52, finally I tried all my mics with almost all sources: Drum, Brass, Percussion, Strings Violin and Cello, Guitar Folk and Classical Guit Amplify and low voices and of course ...
It's a matter of taste, but the quality is l. His masterly a political commitment to music.

Compression is more like a limiter when same. The more you push the more it pramp limit. It works a little old you it seems like toft audio. Is the gain of changing its behavior. It lacks even nervosa with an attack to 0 it lets its micro-second switching time of inaction APRS is a real Less for him. Colmplexes on signals, such as a complete set of drums or Over Head is less "boring", but on a low .... Too bad. I did not even pass a mix deans but I really think it is almost done.

Well I'm a fan. I've had the T Toft Audio Universal Audio of the art ...
Apart from the original sounds about these brands. The 1960 sounds much more class than everything except the Universal of course.

In between not tried is to rev it seems good quality too, but my machine was suffering from this. I rcupre rvis today by a luthier friend of mine in electronics.

This problem has t often evokes in this forum. The between saturates and is unusable.
My friend "you had a light skeleton, but the manufacturer also said that the Tagus saturates quickly ....... your machine suffers from anything, any components do not run ..."
I dj saturated in the first quarter. he "should spend the first to have a nice Moitiers saturation ..."
A change that I would come see Post.

Transparency is everything for his ings, I make music

I say pre amp prfre characters tried to get an ide!

APRS one year of use I just do rvis because it's worth it.

At: the sound standard fat without losing DEFINITIONS.

Cons: The attack of the compressor fast enough.

I think the other test product from Drawmer to see.

7 of 13 people found this review helpful

deltaneptune's review (This content has been automatically translated from French)

At the config, nothing wrong, that is clear and legible ar, especially pots ... I've had a few hours and just plug in to run the beast and all sounds away! As for the manual, it is simple in French, but my taste too full! missing some usage examples (taken rglages for voice, guitar etc ...)

So in sound! is falling! you heat the BCAN 1 2 hours, until the lamps are heated through and the case is in the box! the sound is transcribed without Souis ... the sound image is perfectly clear and well restored, treble and bass madness! Lamps provide a lgre color but not too ... a unique sound for an acoustic guitar like Martin or J200.

I use this bte yesterday, bought at Home studio promo ... c'tait the last chance the stock car specials APRS fly ...
What I like about this BCAN The definition is superb sound and heat lamps, nothing to do with the type SPP least Honner, Aphex, Art Berhinger or other ... none!
I had the opportunity in my short begins CF career at home studio of SSAI lot of PRMP etr comprsseurs of cheaper, but the adpasse all that my ears have heard .. .
or the price I pay it's going to remain a matter ... but by 2300 ex, has become expensive, but the shot is worth it, and then c pro gear that sounds serious! !
If I had to make another choice, I will take this machine again! Lover of vintage sound warm and well Defines ...

Easy to use, basic but adequate manual. The kind of machine that branch in two minutes and is forgotten

His pro, beautiful and subtle fine detail rendering. Compressor at low audible side effects, unless you push the lamps in their last retrachements. Preamp, solid state, worth a visit. It is possible to let the sound of the compressor without the lights that it comes into action, just to change the sound.

I like a device for vocals and acoustic and electric guitars. On a hat too, it takes a very gentle sound. Beautiful machine that I have for ten years and is used regularly in the studio.

Did you find this review helpful?yesno
»
Read the 6 user reviews on the Drawmer 1960 »