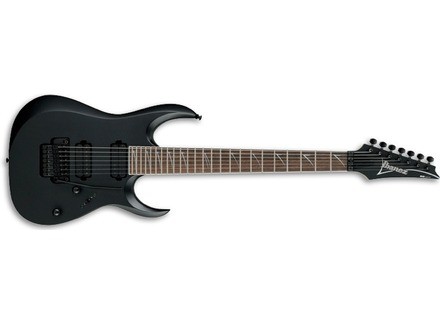 RGD7320Z, STC-Shaped Guitar from Ibanez in the RGD Standard series.

Ibanez RGD7320Z
4
Ibanez has recently been pushing the extended scale RGD series pretty heavy lately. This is the latest edition of the model that's made over in Indonesia. The guitar features a basswood body, a maple neck with a rosewood fretboard, 24 extra jumbo frets, sharkfin inlays, an Ibanez floyd rose, two humbuckers, one volume, one tone and a five way switch.

The guitar itself is pretty good, especially for being made over in Indonesia. It's almost on par with the Prestige guitars in certain areas. The one thing I noticed right off the bat was that this guitar is very light. I've had some boat anchors from Indonesia before, but this was pretty nice and resonant. The floyd on this is decent, but it's not the best one that Ibanez has ever made. It works, but I wish it had a higher quality one. The biggest thing people want to know is how the longer scale feels, and honestly, scale changes aren't a big deal to me. I can play just as easily on a 24.75'' as I can on a 27'' like on my 2228. The 26.whatever scale is nice on this, and the extra tension allows for some more control without being too heavy like when you change gauges. It's kinda like going from 9s to 9.5s.

The guitar's pickups in this are pretty bland overall. The bridge pickup is pretty powerful, but it lacked the clarity that I tend to look for in a pickup. The neck was much the same way in that it had some decent output, but it lacked the clarity I tend to look for. It's almost as if there was some slight fizz going on the entire time. I've never been a fan of stock Ibanez pickups, and I always replace them with some higher quality DiMarzios. I think the D-Activator set would work great in this guitar, especially with the extended scale, although the neck might get a bit bright. If it's too bright, an Air Norton 7 would be great, or a LiquiFire.

The guitar is pretty good, especially considering that it came from the Indonesia factory. It's almost on par with the Prestige models, but it's still not 100% of the way there. It's an awesome seven for those who want a longer length but don't feel like shelling out the cash for the Japanese equivalents. If you're going to keep it, I recommend getting the pickups replaced.
Did you find this review helpful?yesno
»