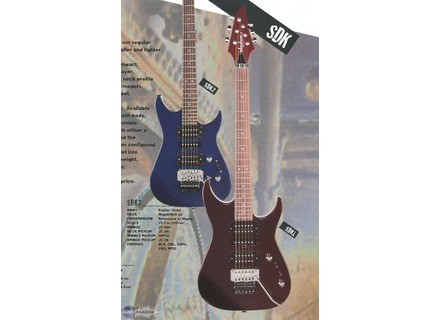 Jackson SDK2 Super Dinky
4
The SDK2 is a pretty rare guitar, and I've only seen one come through the shop before that I can remember. The headstock is a dead giveaway as to what it is, and this headstock can actually be seen (somewhat) on the new Chris Broderick models. The guitar has the following specs:

The guitar was put together fairly well, and it aged decent considering its age. Aside from the various indents on the frets from the wear, I noticed that the frets could use a good level. Once I started adjusting the action, I noticed a few dead spots here and there. A nice fret level would fix that up no problem. The neck joint was fairly tight, so no issues in that department. The biggest thing that I had an issue with was the bridge installed on this guitar. It's one of those cheaper model floyd roses that tend to feel a bit stiff and not have the hardened steel that the original floyd rose has. If you get one of these, I recommend replacing it with an original floyd rose for better tuning stability and tone.

I'm not the biggest fan of poplar wood. It just kinda sounds odd to me, but it could be because I don't use it often. The bridge sounded a bit bright, but it was also kinda loose. It reminded me of a cheap JB copy, and I almost think that's what they were going for. It lacked the clarity and note separation the original JB has, though. The neck was also a bit bright, but it was workable. I was able to get a decent lead tone out of this. Split positions were cool for clean tones, but I couldn't tell you how good the middle sounded alone as I never really used it. I only use the middle position for split tones.

See if you can find one of these on eBay or the guitar forums. You should be able to get a pretty killer deal on these. Keep in mind that they have 22 frets instead of the normal 24 frets, so that may or may not be a deal breaker, depending on what your priorities are. Also, make sure you like poplar as a tone wood.
Did you find this review helpful?yesno
Cookies help us improve performance, enhance user experience and deliver our services. By using our services, you agree to our use of cookies. Find out more.