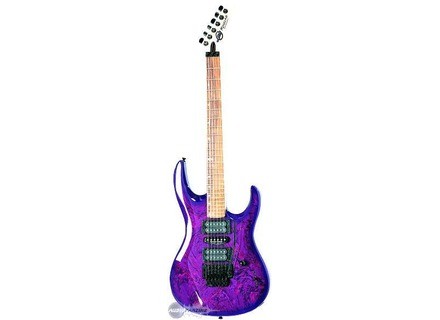 Rockline MetalMaster, STC-Shaped Guitar from Lâg in the Rockline series.

View other reviews for this product:
Lag Rockline 1991 model made during the path Moulis in Toulouse, according to my specifications (minor changes on a serial Rockline).

- Basswood body (basswood) very light, large chamfers and sculpted heel for access to acute excellent for a handle screwed.
- Maple neck 24 frets, reverse head, rosewood fingerboard, jumbo frets. Curve of the handle similar to the rest of the prod &#39;Rockline of the time. Diapason 25&#39;&#39;1 / 2.
- Schaller Floyd Lag stamped, black hardware, 1 volume, 3-position blade switch (since replaced by Schaller Megaswitch 5 positions), Straplok Dunlop series.
- System H / H, the micro config has changed over time. This guitar I use for testing microphones. On the original DM Fred / PAF Pro, it has endured DM Super Distortion, Air Norton, Norton, Duncan SH6, EMG 81 and so on. It is currently DM Tone Zone and Air Zone.
- Big bad taste (I was young ...), snakeskin finish up over the head reverse. Deco skin TIAG Dick Rivers, what ... By 91 I was a proud, 95, was already ridiculous ... Then in 2007 ...
- No frills type bindings, rare woods and precious. In the basic standard.
Note that when I had received the mark of abalone in the fifth box was too depressed, you could feel the hollow of the DOT under the fingers. Fixed some time later. A small lack of finishing.

A big advantage of Liptonwood (yeah, what the linden) weight. This guitar is very light and this light weight coupled with a very good balance makes it a guitar that knows how to forget, sitting or standing. A real tool.
One big advantage of the Lag, the curve of the handle. Super comfortable, requiring no adjustment period, this handle is a reference for me. In the same spirit as the Washburn N4, the Jackson DK1 and DR2. A real success, not too flat, not too large. Again, the handle is there to be forgotten.
This guitar is really in the mainstream tool for guitar hero of the early 90&#39;s.
Big structural problem, however, rippers for studs of 15mm Floyd are the trapping of micro bridge, not far against 30mm on Jackson, ESP & co.
With wood denser and harder than the Liptonwood, and pulling strings "normal (9-42, 10-46, etc.), no problem. Where things become worrisome is starting to put the largest pulling. The short distance between the studs and screwing the microphone associated with a soft wood become a structural weakness to be taken into account, the string tension that could potentially happen to crack the body between said knockouts. So wallow hopelessly holding agree. And then he&#39;ll have to find a luthier really mastering his art to make up for all that.
Using "normal, he is a good 7 or 8 out of 10. In teasing tuning underground, the cable tie type EDF, go your way. 2 10.

The Liptonwood a characteristic of his own, he knows to be forgotten. According to taste, we can call it a neutral, to really return the game to color easily with different pickups. Or hopelessly bland. Choice.
Nevertheless, coupled with some microphones, the sound of that Lag is not bad at all. The pair DM Tone Zone / Air Zone that the team now he is fine. The Tone Zone arrives in all its growling low in saturated, it has plenty of gain in reserve to address the most diverse styles in the countries of meutàààl. In clean, it is really nice. Of the Clean Air Zone are excellent, but with a predisposition for heavy bass, and treble only withdrawal. Coupled to a split, it makes us a nice little guitar, terribly versatile (for a guitar in H / H) and effective in many styles. I&#39;ll let you look at the views of these two microphones, we are here for the Lag, and since I change the pickups every other day on this beast ...

Though this couple TZ / AZ is already in place for quite some time, I enjoy with.

Pffff, what about that guitar ... well in all styles as long to take it easy on the pulling of strings. No identity amazing so far. Versatile, without strong identity. Good but not exceptional.
The decor is very ugly. Besides, I think all generations have always sin Lag on decorations, too much based on stereotypes of fashion. They are getting old very quickly.
Snake skin, a kind of photoflame ("impression" on special paper, mounted on the body, hidden on the edges of the table with a sunburst nipple paint and varnish spread with) old moderately well or rather poorly: the Deco comes off around the switch and the holes for the studs of floyd.
The vibrato is the shock (I stuck there 2 or 3 years). In 16 years, little damage: two arm vibrato taking the game (it turns into 5 minutes), the input jack took of false contacts.
The varnish was cracked in the &#39;neck pocket&#39; (at the junction body / neck) and oddly, still one of the studs between Floyd and the volume knob.
I avoid the ties of barbarian (max recommended by my luthier, drop in the 10-52 C, where I spent the 13-56 for the same tune on a Jackson SLSMG).

That is, an opinion which is what it is for a guitar that is what it is worth.
Aaah if in 91, this guitar was hand made in the workshops of the way of Moulis, a hybrid between Rockline I loved and ... Banez a Satriani (Voui, I too was a groupie cunt in my youth). It cost me 7400FF. Funny, inflation ...
Finally, just like that, it is between us, I am really appalled at Lag. Year after year, the range has been completely revised, modified en route to the point where, between one year and the next, radically changed the woods on the same model. Shapes, fittings and ... owners. Besides, now the country of production. Definitely not the ideal place to build its own identity, right? Hence the often ridiculous prices into an opportunity. But the opportunity, make sure, before buying, what are the specs of your future Lag.

Edit 01/05/2007: Good content, it was necessary that I put a notice after 16 years of service and found myself with a new damage. Inserts screws went bridges in iron filings, to the point where now they no longer hold the bridges in position for some strings, so adios accuracy. Super happy there ... The inserts are made in the same set of vibrato, the only element not found in Retail ...
Yep, it&#39;s a Schaller, but manufactured to the specifications of the time lag, not really built like a tank after all.
So replacing the heels with a black OFR (that&#39;s all I had in stock in my spare chicken deluxe). Necessarily to get high for a vibrato Lag is not really the form of a CAO, it&#39;s pretty ugly. And it&#39;s jam given to pigs.

Come on, notes &#39;features&#39; and &#39;overall opinion&#39; amended accordingly ...
See the source
Did you find this review helpful?yesno
Cookies help us improve performance, enhance user experience and deliver our services. By using our services, you agree to our use of cookies. Find out more.