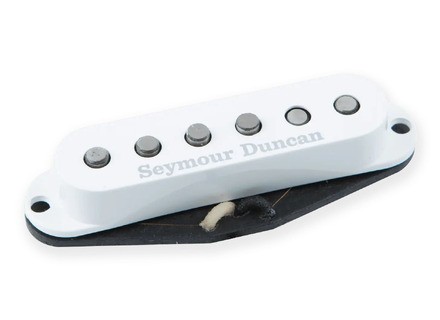 The SSL-1s are very vintage sounding pickups that go great with Stratocasters. These pickups are fairly bright and clean sounding, but they also have a fairly nice bottom end. The highs are crisp, just like you’d expect from a single coil. The midrange is pushed back a bit to help give it some clarity, and the low end is very even sounding to complement the overall tone. Clean tones totally sing and can get an awesome Eric Johnson style tone. Chords are also very clear and precise sounding. Under medium gain, these things really have some nice attitude and can give sound great vintage style gain tones. High gain tones, however, are a bit lacking given how low output they are.

I’m a big fan of these in the middle position. Given that I tend to like hotter single coils, I prefer something a bit hotter in the neck. When they’re in the neck, they give a great clean and midgain tone, but for higher gain playing, they fight me too much in strats. Obviously, they’re a bit too underpowered for me in the bridge position, but they might work if you’re into more vintage style tones. In the middle position, it gives a great clean tone and leads to an awesome “quack” when combined with a neck single or split coil humbucker.

If you’re looking for a more vintage style single coil in the Seymour Duncan lineup, these are probably your best bet for the money. They’re great sounding pickups that should work in most situations.

Seymour Duncan SSL-1 Vintage Staggered
(Originally written by SlapKid/translated from Audiofanzine FR)
I installed this pickup in the neck position and replaced it after two months with a Fender Tex Mex set.

I don't think it sounds very good. The sound was a bit too soft and the G string was too loud. Poor sound articulation compared to the Tex Mex pickups, which I like much more because they sound exactly like I expect Fender pickups to sound.

Considering that the three Tex Mex set is a bit more expensive than a single SSL-1, and that I had to replace a faulty SSL-1, which wasn't new (no sound on the A string and very thin sound on the higher strings) you'll surely understand why I don't recommend this pickup. And it generates as much noise as the Fender pickups. So you'd better buy the original in spite of their noise or even better, a noiseless Kinman. It's my personal opinion.

Update much latter: I installed on another guitar a reverse SSL-1 in the neck position and a TexMex in the bridge position (no middle pickup) and I get very good results. And with both pickups there's no noise. It's a true delight for clean, overdriven or heavy distorted sounds.

As a summary, I would say that it is very difficult to choose the right pickup because it can sound great with a given guitar and very bad with another one. I wish you good luck...
Did you find this review helpful?yesno
»

Hoenne's review (This content has been automatically translated from French)" A very very good product."

Seymour Duncan SSL-1 Vintage Staggered
5
I have for two weeks. Before mounting the microphones had my original 2000 Fender American Standard, I wanted a more distinctive, more typical of the old fender, and after hesitating between those there, bare knuckles and MS Tornado, j 'I opted for SSL.
And I'm not disappointed! After assembly, which is relatively easy on a stratocaster, I was amazed by the sound. More defined in the neck position, the more rattled and really vintage at will.
For the price I'm really happy with the results!

For information they are mounted on all of Mr. Frusciante Stratocaster! (You can check, he said in an interview in Vintage Guitar magazine in 2009).

Did you find this review helpful?yesno
»
Read the 9 user reviews on the Seymour Duncan SSL-1 Vintage Staggered »