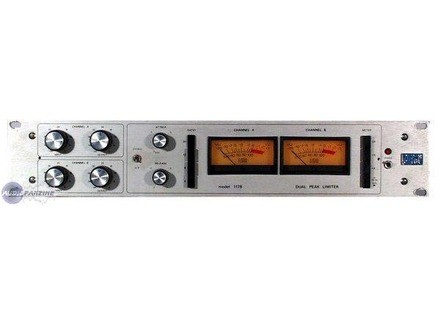 Urei / Jbl 1178
5
The Urei 1178 is a stereo compressor that is made up of all analog components.  Since the one that I have used was already racked up in the studio that I used it at, I'm not 100% sure on the connections, but it is probably safe to say that it at least has XLR connections, depending on when it was made.  The unit is rack mountable and will take up two rack spaces in a traditional rack space.

Although different in look and is a stereo unit, the Urei 1178 has the same parameters as the famous 1176.  Each of the channels has leveling knobs for input and output, and then there are attack and release knobs that control both of the channels simultaneously, and this is also the case with the ratio buttons.  Like the 1176, you've got ratios of 4, 8, 12, and 20.  Both channels have their own VU meters, with a variety of options to control what you are actually metering.  I've never seen the manual for this unit, but never felt I needed one anyway.

The sound quality of the Urei 1178 is very similar to the 1176, and although I haven't compared them side to side I would bet that they would be very familiar to each other.  This of course is a good thing as this is a great sounding piece of gear that is suitable of compression just about anything that you would want to consider using compression on including guitars, drums, and vocals.  Since it is a stereo unit I often try to pair it up in instances that I might want to compress a stereo signal like drum overheads or an electric piano.  This being said, I would bet that a hundred different engineers could find a hundred different uses for the 1178.

All in all, the Urei 1178 is a great sounding piece of gear that I can't say a bad thing about.  If you've used this or the 1176, you know what I'm talking about.  These models have great reputations for a reason and this one has definitely lived up to it in my opinion.  Since they no longer make these, they aren't all that easy to find but if you've got your heart set on one I would think that you'd be able to find one to buy at the price that you would expect a high end piece of gear like this to be at.  The 1178 is definitely a piece of gear worth looking into if you are unfamiliar with it...

pierresound's review (This content has been automatically translated from French)" UREI"

easy to use if you know how to listen.

Do not make a block on the concept of "optical trigger" is awesome ... absolutely!

Compression / limiting applicable in stereo, for example on a subgroup (batterie..) What energy!

otherwise on vocals, guitars, everything ...! using a single channel. it becomes surgical, so it facilitates the placement of the source in a mix.

great, nothing to add.

used for over 15 years, never disappointed.

price / quality ratio consistent (used anyway, so follow the ads, but does not lose value)

yes, "we must" make this choice (forget plug'in!)

sensei's review (This content has been automatically translated from French)

Urei / Jbl 1178
5
- Peak limiter is a two channel, with a non adjustable threshold (you must play to compress level of + or -)
- The ratio is fixed by choice with 4,8,12,20,
- Configuration of A / B (double mono and a low kick or two votes, ...) or Stereo (drums, piano, vocals ...)
- Rglages of the attack and release are identical for both channels but it did not pos of problem, just intelligently grouping the sources that are happening inside ....
- Connection of terminal block
- The VU meter are clear, legible and with several types of display: Peak or RMS, output level 0 (VU meter standard) 4 and + 8 (in this case the saw when the meter indicates 0 in fact you have 8 + dbu output .. trs o DIGITAL COUNTERS practice must "fill" the comvertisseurs)

- Use super simple, you can even by-pass the compression circuit (by setting off the attack button) and then use it as a "rchauffeur" of his even if it is not lamp, these circuits are of incomparable sweetness ....
- No manual but no need to use, but can be for us and the values ​​of ms attack time and release to allow good compression enchantment when it uses more later, but good, above all the ear is the .. !
- I put a 9 because srigraphie of working time would desirable t ...

- Used 5 years, I love her sound sweet and clear, its rglages simple and effective, robust (I've used several times in concert, collection outdoor in torrid heat or with the 'monstrous humidity and no failure!)
- My only regret vritable: the absence of side-chain!
- I would do without this choice hsiter!

Bubbagump's review (This content has been automatically translated from French)" color!"

Urei / Jbl 1178
4
VCA compressor both channels.
The compression section is identical to 1176, the difference is at the preamp output line, is in IC, the 1176 using a discrete circuit with transformer. And of course, the second channel.

it's old too, so it must be revised.


Pass through without compressing the signal colors already. This color in the upper medium, already noted in the preceding opinion is in the output circuit. The more you shoot the more there a. Is harmonic distortion, neither more nor less. This gives a distinctive character to the tracks processed, making them softer and fuzzy, while placing itself well to the mix. It also planed a little spectrum to extremities.

Compression is beautiful, very characteristic of the very short time of release we have all heard before he tried the machine. Attacks on short, it is "squashland" snares out of OH and become distant cannon fire, the acoustic guitars plinkpln taken too close harmony. For voice we add the grain is less smooth, but not to blunder into place everywhere, it does work anymore.

3 years of use.
A classic sound, frankly typed while being versatile.
a beautiful machine.
Did you find this review helpful?yesno
»
Read the 6 user reviews on the Urei / Jbl 1178 »