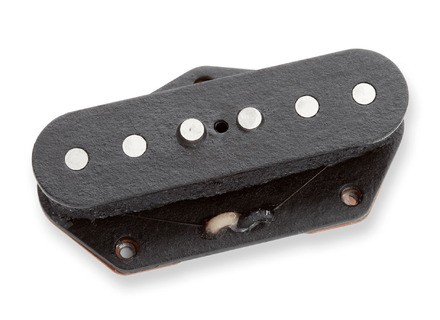 Seymour Duncan STL-1B Vintage Broadcaster Lead
3
I bought this micro there almost 20 years! (1987 ouch), I had ordered Vesinet-Music ... It was for a project, the handle and fittings were Squier (then the sleeves were good because there was a good dry maple Korea) and I bought a basswood body with James before TRUSSART This remarkable instrument maker in the U.S. do not file (Bye James). What memories ... 20 years later we can say that it's "Hordage"

At the time offered only 3 Seymour Duncan pickups for Tele replacement, including VINTAGE BROADCASTER, this micro 500francs cost more than at the time (aie aie). But the sound was what Duncan did best, and has the time, few guitars actually sounded and they all snored galore!

I started by desoldering the original son of the son that were consistent with the vintage Fender (son of tinned insulated cable) but you see, I prefer to have the two poles and earth separate and coaxial to limit hum and have the two additional sounds and serial number of phase with the neck .... This must be done carefully, failure of iron shavings, and the winding key = micro in the trash!

the bottom plate is copper-plated steel (not copper), the pads are thin, slightly magnetic (artificial aging) the winding is protected by a wire cable wound and the whole is impregnated with paraffin, according to the original model.

I have not mounted it on a micro chevaket "Ashtray" but on a modern "flat" with six bridges, this has little impact on the sound.
And just the sound is very different from a TELECASTER STANDARD, fans TWANG, go your way! do not expect to make the country or chicken picking, it will not sound good for that. This mic sounds ROCK or rockabilly, incisive and sharp as a tele, but with a good definition when it is saturated, even strongly. In this connection I said that if the output volume is less than an American Standard Telecaster is a tiny proportion.
Less twang, less resonance, say you'll get closer to Springsteen, Keith Richards of the rock, Steve Cropper for the R & B sound on intermediate ...

A great choice if you like me at least 3 TELECASTER ... and you like the shades. on the other hand I do not recommend to anyone looking for a typical Standard Telecaster. Obviously it ages very well, I always use this guitar has collected a lot on stage 20 years after the studs have rusted the microphone, it is definitely vintage.