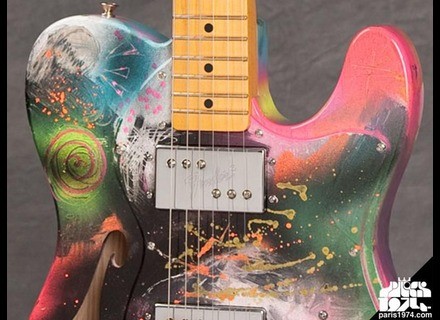 ricou8312's review (This content has been automatically translated from French)" Unique!!"

DIY Telecaster
5
France made it by myself!!
Telecaster thinline alder.
GFS pickups from U.S. customs and sounding terrible.
A push-pull volume for the microphones sapote simple., A tone and a 3-position selector.

Very nice for the simple reason that this is the part that I bought ready made! Channel!
Very close to the original 72 thinline tele guitar.

Guitar of my dreams!
Very versatile, due to the split pickups "
I play a Fender 140w combo and it goes very well.

Gone for 6 months, after a period of adjustment for my taste.
Now she treats me and what satisfaction of having done it myself.
I do not look at the cost, to me it is priceless.
Thousand times I would do this choice.

DIY Telecaster
5
Mine is a bit specially because I assemble my same spices from all origins for us (but from DIFFERENT MODELS) commands to direct the states via ebay store "stratosphere". I end up with a tele assembled with the following elements:

fittings and mcaniques end of 2007 us standard MODELS

a slecteur three positions, a CONTRL volume and tonality of a plug and play, difficult to easy, which makes this even more mythical MODEL when we see the richness and the stretched to its sonic palette!

history of any buzz or hum level indsirables I PROCD shielding cavities and pickguard with aluminum tape. no problem that the level of the shot.

So start by the handle, a MODEL sometimes criticized by some users of its highway MODELS CHARACTERISTICS dplaire can:

matt varnish, trs end, I found that nickel: incomparable softness of touch (a bit like playing on satin!), does not stick to fingers unlike traditional varnish, plus a report Aesthetics I find trsrussi (lighter finish than varnish over the saddles "classic", a small milky ct the most beautiful effect)

(Large) jumbo frets that some may appear uncomfortable. l still love me, I find that it increases The definition of notes and the precision of the game APRS, everyone gots his and his style (fans of the game can quickly feel be less comfortable), and for me, since I am anything but a shredder, I feel like a fish in water.

Finally, the handle is pais / off on some other models. the still, I like this type of race that we feel in the hand and I find reassuring. as I played for a certain time on LP, I have got such a handle, which is however anything but a stick type BChE &#39;50.

Access in acute plutt boards of the shape which allows providing an optimal strat Aesthetics that I got ... (I told you earlier that this is scratching gniale ...), good ergonomics, weight is not excessive, and view it is very enjoyable to play, it takes hours and hours of playing before feeling some form of discomfort.

I put 9 because I prfre when I have the possibility to have two tones, one for each microphone (it is this aspect that I Dranga a bit on the tele, but it s &#39;it is), which provides a better sculpt and refine the sound indpendamment for each microphone.

The sound: it is standard. again this is scratching gniale share the richness of its sound. microphones selected typs with characters, are also can be for something.

remains in a vintage spirit for each of them, with precision, a rich sound, a diabolical DEFINITIONS! in distortion is still nervous and I find prcis. his clear and sublime without default, slamming into agreements beautiful effect.

both dgagent also good low round well (sometimes I play on my LP), and crystalline highs, a tad aggressive tone if you push the bottom with the &#39;custom 52 (bridge) . but the legendary "twang" of tele is Submitted.

In addition, they marry well plutt one and the other characters with a complmentaire and sturdy. I initially installed by a neck from the micro alnico MODELS highway, but it occurred to me fade ct of &#39;52, me and a lot less heat. Then I had the opportune to buy a custom 62 &#39;and the Difference is really gross, especially intermdiaire position for once.

for résumé is one of the most versatile guitars that is just my opinion and agree plthore styles. For my part, it&#39;s rock 60&#39;-70 &#39;, blues, post rock, garage mostly, and I really find the correct sound every time. I use all the config micro, depending on the desired effect in my compositions. TRRRROP the ball!

I started this project it up There&#39;s three months, by dj intrt guitar for the object (how it&#39;s all over, component assembly, ...), by the I want to make a custom MODEL "unique" (pending launch myself really in the violin) and the challenge, via the principle of states to control authentic spices in an ebay store, to make me a tele us for about 500 euros, or roughly one-third to half the price displayed in shopping for MODELS us.

I knew then not too much tv, that in 13 years of scratching, however, I never had the opportunity to use up what my cousin me refile his squier tele hack. and it is the input that I am in the world of TV, microphones APRS change this filthy squier, I had a rvlation: I needed one! only, as my budget limit and got caught with the assembly / disassembly, the option of ordering spices dtach be an obviousness was in April!

well aa t a success at all levels: not only the guitar I like Aesthetics (the advantage of choosing his own lments), I have learned (by doing the SETTING THE all the guitar) and myself exploded assemble, and especially, the sound is fabulous.

short, it is fast becoming my main guitar in front of my gibson lp standard (though I love) and my strat us 84. Indeed, with it, I can play ALL my directory, which does not allow me the other two individuals, since it offers the sounds some of which include a round tower in the low Gibsonian ct (less fat and drier, Dfine) and ct and slamming fenderien lens that can also offer a stratum.

short, the ultimate quasi quitar and yet so simple to use, and has been for over 50 years now .. is for these reasons that this is gniale scratches.

shop on ebay, if given a desire for some, go for it! pices in the coming ten days, the packaging is nickel, my neck has not even needed a rglage when I reu and install. However, some taxes are subject lments douanires: I ordered my guitar in roughly three times (body and micro / fittings, mechanical and pickguard / sleeve and micro), and only small packages of spices in Chappes dtach customs. in the other two cases, one must know that a score of 15 euros fee plus 15% of the 20 parcels. Therefore, the most INTERESTED is to group up its purchases.

the arrival, the guitar came back 686 euros shipping costs and customs understood, much less be a tele CHRE basic store. l I put a little of me in the assembly, and I guarantee to have a models only. luthier from whom I took him to blow rglages APRS = increasing (which have not ncessaire t) is not income.

See all 58 photos of DIY Telecaster »