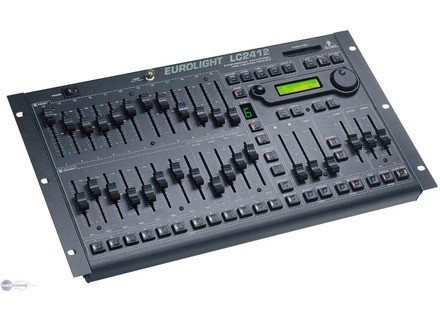 All user reviews for the Behringer Eurolight LC2412

labricole71's review (This content has been automatically translated from French)

Behringer Eurolight LC2412
3
I use it for 4 years not often trs. It is compact is its main quality. For small benefits, such small gala School of dance, orchestra ... or for those who are still blocks but also 0/10V DMX.
It is a 12 circuits and 24 circuits pRPA 2 of 2 pages, 12 x 10 banks of memory.
The only fault I had is the battery that has made me. The console was everything. The state of the battery is displayed at boot time (a watch from time to time).
The manual is a bit hermtique I redid a condensed operating instructions and more clear that I always leave with.
In console troubleshooting and for the price I have not seen better.

I read and reread the manual before buying to try to understand something and see if the bte corespond my need.

I came across the manual for the MA Lighting Lightcommander 12 / 2 which served as Behringer MODEL to design the Eurolight LC2412. This manual is much more oriented towards the user with paragraphs full of tips to learn how to handle the BCAN. "Train you to use the features above Describes
before entering the next chapter "back end of each chapter and it's what to do. You find it in French on the net.
to aid me in understanding the pholisophie machine actually quite simple queand we get into it.

Then I bought the console Eurolight LC2412 and did a lot of manipulations by following the book literally. I finally understand. It took even when I repeated the manipulations several days for connatre well.

For this first concert, I plugged the projector (9 PC1000 white to the front and 5 + 10 PAR64 PAR56 rpart in 3 colors cons) of Manir appropriate block on my power to ensure that faders of the top of the console are a logical order:
Front left, front center-left, front center right, right side, facing the central left blue, blue medium, blue right, red left, red medium, red ocher and then right (all in parallle PAR56), which occupies the 12 canaus console and 12 channels of the power block.

Programming memories I have with several variants of the face, red on a fader, blues in another and ochres on another.
I also put on four chases memories right channels, allowing to flash projos: during the applause, the same as those projos Aviant t clear during scne Congratulations to put themselves their Manir.

During the concert, I had the guy on my left and my right of her the guy who did the live recording. Both have quickly realized how trs has worked and played a great time doing the concert Lumire me.

When it was finally understood and RALIS simple. But I spent a lot of hours to understand how to use it.

Of all the calves, with another console like the MA Lighting Lightcommander 12 / 2 is not the same philosophy prs, prs that Behringer has this addition more opportunities and therefore more buttons and complications.

pixou's review (This content has been automatically translated from French)

Behringer Eurolight LC2412
3
I use it for a year.
It is cheap but a table trs complicated.
They too put option, you get lost. In addition, it is a false and true 24 12.