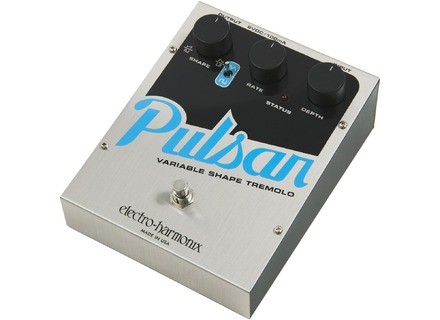 Pulsar, Tremolo pedal from Electro-Harmonix in the Pulsar series.

Electro-Harmonix Pulsar
4
This is a Tremolo pedal for guitar. It can also be used with other instruments like keys and bass but I haven't tried it in those respects. It has a 1/4" input and output and can be powered with a nine-volt battery or adaptor. I recommend the adaptor as the sound will maintain a consistent sound quality, while a battery will diminish the sound quality as it runs out of juice. It's an analog pedal, and as such, is not capable of being edited through a mac or pc. It's also not rackable.

This pedal has a really simple setup, just three knobs for depth, shape, and rate. There's also a switch for sine or square wave. Frankly, most players will not know exactly what any of those things mean. Which makes this pedal more of a "figure it out on your own" type of pedal. Not that there's anything wrong with that, but this pedal is definitely one you'll have to spend a few minutes with to get the sound you want, as it's far from a conventional tremolo.

This is a really great-sounding pedal. It has everything from conventional tremolo sounds you'd get from an amp like a Fender Twin Reverb, to a wacky and wild-sounding tremolo. Depending on where you set the pedal, it tends to favor the latter more, but it'll still be able to get that low-key tremolo sound that I tend to prefer. This is definitely a great investment for somebody who really likes to mess around and get some crazy different sounds, as it can really add to the overall pallette of tones that you can get from a setup. I personally think it sounds just as good with a Strat/Twin setup as it does with a Les Paul/Marshall setup. I will say that I don't like it much on Solid state amps, but I generally don't like those amps anyway, with a few exceptions.

All in all, this is a great pedal. Great range of sounds and uses. Price isn't too bad and it's Electro-Harmonix which is a quality manufacturer. Highly recommended.
Did you find this review helpful?yesno
»

Using the Electro-Harmonix Pulsar isn't hard at all.  The parameters that it has includes knobs for shape, rate, and status.  The shape can be used to control two different modes - either a sine or square wave.  Even if you don't have any experience working with tremolo or vibrato pedals, this is easy enough to figure out on its own as it is self explanatory and pretty easy to follow.  I've never seen the manual for the Pulsar, so I can't say too much about it, although I don't think too many people will need it.

While I can't say that the Electro-Harmonix Pulsar will match the sound of some of the built-in vibrato and tremolo effects built into vintage amps, as far as pedals go this is one of the better tremolo pedals out there in my opinion.  I have used the pedal with a Fender Stratocaster and a Marshall JCM 800 amp.  I usually use Fender Twin Reverb and Fender Deluxe Reverb amps for recording sessions and live shows, but during times that I might want tremolo and don't want to use either of those amps, this pedal works great.  I also like how versatile this pedal is, as you can definitely get more tones from this pedal than you could an amp like the Twin Reverb.

As far as tremolo pedals in this price range go, Electro-Harmonix Pulsar is probably the best option.  It has an awesome sound quality and will fit into most people's price range for a pedal like this.  I definitely trust the pedals made by Elcetro-Harmonix as they have consistently put out top quality gear over years.  This is definitely a pedal I'd recommend for someone looking for a reasonably priced tremolo pedal.

pumuckl's review (This content has been automatically translated from French)

Electro-Harmonix Pulsar
4
A tremolo what is most basic, no frills, triangular or square wave, tuning frequency and depth.

All adjustments are large, wide range of variation, the tremolo tremolo slow and soft to fast and chopped

The a word, without being disappointed, we must see it's not always easy to find immediately the sound we are trying but in the end there always happens.

Very good for that price, nothing to say ...

A good tremolo, value for money unbeatable at the moment
Did you find this review helpful?yesno
»

got_disto+'s review (This content has been automatically translated from French)

Electro-Harmonix Pulsar
4
It is a tremolo, 3 settings: shape, depth and rate

A very good tremolo of a general point of view but with some flaws:

Assets:
The grain of the guitar is very well respected
We can change the type of waveform for modulation is going up and down on a hash of his or her the most beautiful effect
There is a real by-pass
the price (80 €)

Cons:
settings are not obvious and a few degrees on the button spleen greatly affect the frequency of the tremolo
when you push the button at the bottom Tremolo Depth kidding, the switching frequency and its changes become generally bad. Basically, this pedal works great if you do not exceed 3 / 4 of a turn on the Depth

In any case I do not regret my purchase, no pedal Electro-Harmonix not disappointed me so far
Did you find this review helpful?yesno
»
Read the 10 user reviews on the Electro-Harmonix Pulsar »

See all 66 photos of Electro-Harmonix Pulsar »

View all 2 videos of Electro-Harmonix Pulsar »