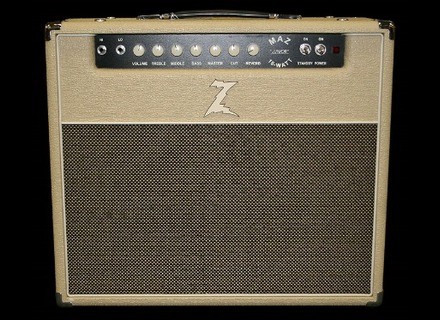 DR Z is a company that builds some of the most affordable high quality low watt combos in the industry. They have such a great classic rock tone and what they are all about it pure tone. These amps prides themselves on being somewhat versatile but more user friendly tone machines. These amps are great for just about any style of music other than metal. They have a solid tone and many artists are using them on their records and live touring stages.

This amp is the exact same amp as the non-reverb version, but this simply just has reverb. You get all the same great features and tone but the added effect on top of it. There is a bit of a higher price on this one compared to the black version. It could be that is a custom color or availability. This amp is very popular with the country players. It has a great tone for guys you like to chick pick and get that chimy clean moderately broken up overdrive sound. This is also the same amp as the standard version but just in a nice looking blonde tolex covering.

This amp has a solid sounding reverb unit installed in the circuit. It adds a nice room filling effect that just compliments the natural tone of this amp. It has a nice blend of the power tubes and preamp valves. This is an amp that will take pedals very well. It has a nice effects loop to allow its user to insert delays and chorus sound into the effects loop and still keep the same preamp tone. For not being a whole lot of power it still packs a big punch in volume and tone. That amp sound very big and that may be one of their selling points. Their amps aren't a hole lot of power but have a brilliance of volume and girth that make them sound incredible.

These amps have a familiar control knob called "cut" which you may have seen on another amp called the VOx Ac30. This allows you to dial in some of that class grind. The "cut" knob may be the most useful and versatile tone shaping tool on any guitar amp. Throughout its range, it produces a large variety of sounds to satisfy players using all guitars for most every style of music. The "cut" knob is best used after the EQ is all set; turn it up for extra edge, turn it down for a more vintage sound.

You can pick these amps up new for right at around $1899. That is a great price for an amp that sound this good. It is a very usable gigging amp and will treat its owner quite well. I would recommend this amp to anyone who used to like the tone of a class A amplifier and wants a great deal of one of the best combo out there. This is going to appeal to those type of players and also the guys who like Fender but need a little bit more drive in the tone.
Did you find this review helpful?yesno